Which test is easier, SSAT or ISEE?

I understand this is not a fair question, but hope to know which one is easier to get a higher score.

I also noticed that ISEE only has 9, which probably is the equivalent of 87 to 99 percentile in SSAT. Then how does a school know if it is 87 or 99?

So, in the end, it really depends on you.

Yes, the ISEE’s highest score is a nine (on a stanine scale) but it doesn’t translate to an 87 to 99 percentile on the SSAT (as far as I know). A 9 on the ISEE requires the particular section be a percentile of 96 and above. Additionally it is my understanding (and I might be wrong about this) that the schools actually do see your percentiles on each individual section on the ISEE although it is true that the ISEE doesn’t give and over-all percentage like the SSAT does.

google confirms you are correct.

The highest grade on the ISEE is not a “9”. The stanine is a short hand score which people often discuss. But you also receive a second score like SSAT 87, 94, 72. Etc and the schools see those scores. The stanine ranking will change from test to test. 89 or some test might be 7,8 depending on test. There is no overall percentage like SAT.

ISEE math is generally harder. SSAT verbal is generally harder. With prep, my son scored pretty similarly. ISEE has more of a time crunch, it seems a lot longer. Many kids struggle with the pace of the test. He had to work really hard over a period of time to be able to regularly complete the test. Thankfully that pacing has carried over.

I think if you fall in the bottom of the # ranges, the ISEE may show you as better. The weighting toward average, however, can be quite frustrating for some.

It actually depends on what your strengths are. The ISEE emphasizes (I wouldn’t say ‘focuses’) mathematical ability while the SSAT emphasizes reading ability and verbal.

On the ISEE, there are two separate sections for math, just like the SSAT. However, the SSAT combines the two sections together whereas the ISEE keeps them separately. As you already know from @jpmorganchase21, there are 4 sections so the math would be half of the test.

This is why many people would assume that people better at math would do better on the ISEE than on the SSAT. This is true for many cases, but personally, I prefer the SSAT. Even though its reading and verbal are harder, there is more time provided for each section. The ISEE forces students to do challenging math problems in a lesser amount of time, which will make it more difficult to get a higher score. The verbal and reading sections aren’t much less difficult than the SSAT (in my opinion). However, the SSAT covers more variety of articles than the ISEE. The ISEE also has less questions than the SSAT, so getting even 2 or 3 wrong will be bad news. The vocabulary for the ISEE is sorta similar to the SSAT vocabulary but there are less questions (40 questions), so getting more than 5 wrong would REALLY impact your score.

Ok but this is just my opinion. Please don’t rely on my advice because I’m not an expert on the ISEE. I wish you the best of luck on your test!!

Thanks everyone for your thoughts.

Percentile on ISEE is NORM base, I believe it is much more meaningful than the stanine scale score, as I read all the CC threads, it is indeed super hard to get all 9’s for 4 sections

Also you can only take the ISEE once in the fall and one other time in the Winter. By contrast you can take the SSAT as many times as you want to try and increase your score. 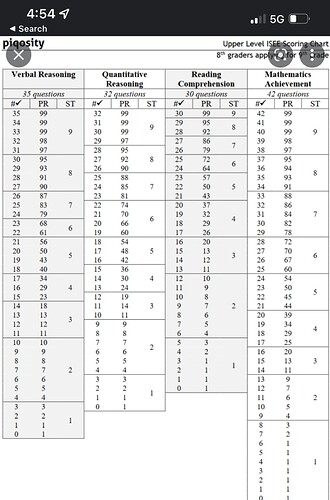 You can get 9 questions incorrect on vocab and still get a decent score. There is less room for error on the other sections.

DD scored better on SSAT even though she is math genius and not so much on reading. The math scores put her way over the 90.

I’d say try both and see how you do on each.

For me SSAT was more similar to the SAT, and ISEE closer to the ACT

Try both and see which works better because it might be indicative of which college testing fits you better. For me I used SSAT and had really good results so doing the PSAT wasn’t as hard compared to the PACT.