Our October selection is While Justice Sleeps by Stacey Abrams, a riveting legal thriller about a law clerk who becomes embroiled in a mystery unfolding in the halls of the U.S. Supreme Court. When clerk Avery Keene finds herself unexpectedly in the role of Power of Attorney for an incapacitated judge, she discovers a string of clues that lead to dangerous information about a controversial case.

Politicians writing fiction may be familiar at this point, but Abrams’s novel merits deeper reading … a thriller, an ‘airport novel’ in the very best sense of the term—it’s fun, fast-paced, absurd, designed to be inhaled in the space of a single flight. It’s also a revealing window into its author’s political imagination—what she wants, what she believes, what she’d do in a position of power. - The New Republic

This is a complex drama of lawyerly intrigues and backroom political dealings, with a dash of evil multinational corporate plotting and a handful of roguish law enforcement officers of varying ranks. Abrams is good at this wide range of psychological portraiture and has crafted characters that are recognizable archetypes yet still specific … While Justice Sleeps draws on all of Abrams’ lived experiences within our legal and political systems…The writing is solid and worth the attention, even considered in a vacuum where one disregards Abrams’ other gig. - Arts ATL

I got the ebook today, and am 153 on 69 copies for hard copy. I think I’ll read the book in the next week, then let the hard copy hold stay and it should come in by October so I have a copy to reference.

Yay I’m in thanks for suggesting it!!!

I downloaded it on Kindle and started reading it while camping in the White River National Forest. Loving it.

Thought I’d pull up a reminder that discussion starts Oct. 1.

My copy arrived at the library yesterday but I won’t pick it up till next week. I just got Billy Summers (Stephen King) and hope to return it and get While Justice Sleeps in one library trip.

I picked up my copy today. See you guys on Oct. 1.

It’s October 1st! Welcome to our discussion of While Justice Sleeps by Stacey Abrams.

This was a fun read! However, I must admit that I didn’t always understand what was going on. I’m neither a scientist nor a chess player nor a political junkie, so some of the medical terminology and the complex political machinations were, at times, a challenge for me to follow.

I also wasn’t always sure what was credible fiction (e.g., some degree of accuracy in how the courts work) and what was fantasy (e.g., Boursin’s syndrome). No matter – I let it all flow over me and marveled at Stacey Abrams breadth of knowledge (and imagination).

Before I was half-way through the first chapter of “While Justice Sleeps,” author Stacey Abrams had me rushing to look up Boursin’s syndrome. A few pages later, I was Googling Lasker vs. Bauer, which is not a trial but an 1889 chess game in which Emanuel Lasker defeated Johann Hermann Bauer by sacrificing two of his bishops to protect the king and win the endgame. And then there are haplogroups. What are they?

Boursin’s syndrome turned out to be a fictional malady. Google it and you’ll either come up with symptoms for bursitis or some mouthwatering cheese recipes. It’s not to be found in Harrison’s “Principles of Internal Medicine,” the standard medical book for internal medicine doctors. The chess references are real, however (as are haplogroups), and the strategies described indicate an intricate familiarity with the game. 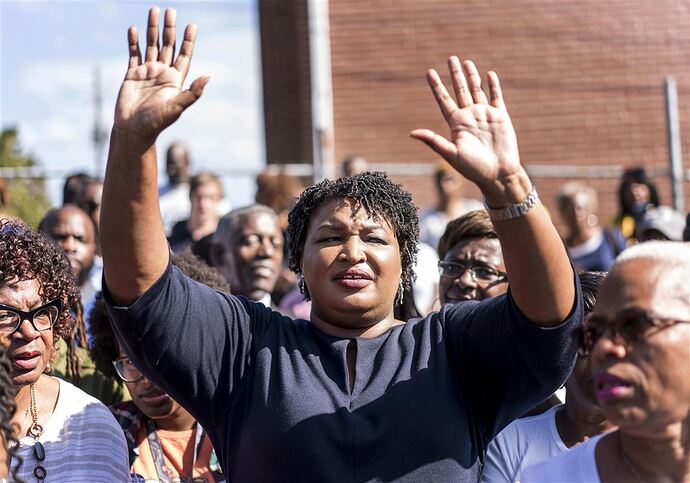 Where does Stacey Abrams find the time to write a novel?

Before I was half-way through the first chapter of “While Justice Sleeps,” author Stacey Abrams had me rushing to look up Boursin’s syndrome....

Celebrated national leader Stacey Abrams is the author of WHILE JUSTICE SLEEPS, a gripping, complexly plotted thriller set within the halls of the U.S. Supreme Court.

I really enjoyed this book. I was also impressed with Abram’s writing ablility. I was hooked from the prologue. Like the author of the Pittsburgh Post-Gazette article above, I googled
Boursin’s Syndrome immediately. I am also not a chess player, so google was my friend with Lasker-Bauer as well. Lasker Bauer was eventually revealed in the novel, but if I had read this book prior to google, I might have believed Boursin’s Syndrome was real and just a disease I had never heard of before.

I’m another who thoroughly enjoyed the book.

One question: Are Justice Wynn and Avery the two “bishops” in Justice Wynn’s version of Lasker-Bauer?

I did enjoy the book very much, even though I had reservations in the beginning. I found it a bit slow at the start: it felt like she set up the characters like chess pieces before laying out the story like a chess game. But once that was done, the story pulled me in.
Chess isn’t my cup of tea but I enjoyed the references. It brought up some good memories for me. My dad tried many a time to teach me, regaling me with historical references and stories about the game, without any success. I think I remember him saying that it was a game played by kings and that games could last years, also that it was known as Chaturanga or Shatranj. But as for understanding the two bishop sacrifice strategy and who was the second bishop in this story, way above my head.
I did want to say that I enjoyed her writing, her phrasing often took me a few seconds to process exactly what she was saying. And some of her descriptions were thought provokingly apt.
She is one smart woman! Also, what an accomplished family!
I’m glad my library got me the book in time to allow me to join the discussion.

@AnAsmom - One of the first consumer reviews I read mentioned how so many intelligent people wouldn’t be so readily available to help Avery figure out the mystery. They thought was too unreal to happen. My first reaction to that review was the reader had not read Stacey Abram’s acknowledgments at the end of the book. Her family is that intelligent! Very impressive.

I don’t have the book with me. The library wanted it back, but I thought somewhere near the end it acknowledged that Justice Wynn is one of the bishops. It makes me wonder who the other would be since in Lasker-Bauer both bishops are sacrificed. Avery seems to be a “bishop” for so long but ultimately she isn’t sacrificed. However, was Wynn willing to let that happen? Maybe Dr. Ani Ramji and Justice Wynn?

Someone with their book still with them check to see if Wynn is mentioned as a bishop. It’s somewhere near the end, if I remember correctly.

The canny devil Wynn had tricked him. Wynn was one of the bishops that would die.

This is information given to the reader in the form of Pres. Stokes’ thoughts whilst in the office of the Chief Justice.

How did I miss that? I guess it is Wynn and Ramji. Very clever.

I just found this in Chapter 31 -
Avery said, “Let’s agree that your father is one of the bishops. If I’m not one of them, then Ani Ramji must be the other one.”

I missed both those references the first time! I guess I forgot about the 2 bishops strategy as I was immersed in the story. Yeah, that was really well executed!

Yeah … I must have missed that Chapter 31 reference or it didn’t stick with me. Thanks to you and @AnAsmom for clearing that up for me.

And it actually makes sense when all’s put together. Those two men sacrificed themselves in order to get to Stokes.

I had really wanted to like this one more than I did in the end. I’m a fan of Stacey Abrams and her political work and had just discovered that she also writes. I’m a fan of political mysteries. I like stories with strong women and plots that lead me down rabbit holes where I learn things like famous chess strategies.

So I was disappointed when the book turned out to have a Byzantine plot with loose foundations interspersed with dialogue that at times made a Harlequin romance read like poetry.

Part of my irritation probably stems from the fact that I listened to it on CD in the car and the narrator was mediocre. Her phony Indian accent was terrible and all of her attempts at gruff male voices sounded the same.

I really enjoyed the ride, but also thought the book was a bit overly convoluted. But perhaps the paranoia caused by Boursin’s syndrome explains it! I am up at the Finger Lakes for an extended weekend and forgot the book even though my library let me renew it even though I’d originally had to wait in line for it.

Interestingly just before I read this book I read the second book of a trilogy (Deception), if I’d realized it was number two, I’d have started with the first, if I’d realized she never wrote number three, I might not have read it at all. I’m telling you this because Avery’s character has many similarities with the heroine of that book. Avery is a more productive member of society, not a professional gambler (though she paid bills gambling), but they are clearly cut from the same cloth. This book is better written and the plotting is infinitely better.

I thought the bad guys were a lot of fun as was the FBI guy that you were never quite sure really was going to be a good guy. As for why Wynne picked Avery, I think that the incident where he met her mother showed him how much Avery could manage. He knew she was smart, he also learned that she had grit and resilience.