$10k for flowers?! And my kid is thinking $2k is outrageous for some things that will go into compost bin at the end of the night.

I agree - it was sticker shock for sure! I think some florists just go nuts over the outdoor & barn weddings and want to cover everything in greenery & flowers. My daughter didn’t care about the flowers either. The florist we chose did an excellent job and wasn’t caught up in the social media marketing of it all.

We had two of these near where the vows were taken. Planted by our CSA owner in pots we got at Big Lots. Total cost $40 each and we enjoyed them all summer! 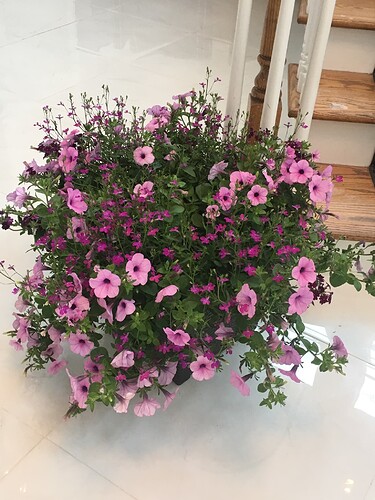 Ancient history, but we had a wedding brunch instead of dinner, dancing, etc. I attended another wedding brunch earlier, and really enjoyed that venue. Minimal flowers. We bought potted flowering plants, and donated them to the church garden.

Speaking of bouquets, apparently there is a growing trend to do “plant bouquets.” Lol. Cuttings of plants (pothos, ivy, etc.) that can be later propagated to create a “wedding keepsake” plant.

This is what I most likely will be doing! Planting a couple of baskets for the ceremony spot.

I’d ditch the favor unless it’s something edible. The last wedding I went to had a large donut in a cute box. We all ate them on the way to our car. Few people care about personalized items.
My daughter talked to a lot of florists and found someone who could work in her budget. Instead of arrangements she had an assortment of small vases with different in season “wild” flowers. She saved on the photographer by not doing engagement photos.

Personally, I wouldn’t skimp on the venue, food or photographer. Flowers/decorations are nice - but I think some of this could be scaled down, some DIY. Favors - just keep them consumable. Don’t think a band is necessary - we had the most fun at a recent wedding where the kids played songs from a playlist using speakers - we all knew most of the songs played and had great fun singing along, dancing to them. Cousin’s wedding had a saxaphone player (big bucks apparently) - but no one was even listening or even paying attention.

There was a ten piece band at son’s wedding last month (including a saxophone player). They just really wanted a live band . The band was fantastic and people danced all night and tons of comments about how great the band was. So, I think it just depends on what the couple wants and what their spending priorities are.

Agree with this. A nephew had a live band that was fantastic. Dance floor packed all night long and they even paid to have them play an extra hour because the party was still going strong. Personal preference.

Agree…an excellent band was our big splurge for D’s wedding and they had people up and dancing all night. No regrets.

I do know that some couples prefer a quieter event and that is great too. But this is what D and SIL wanted.

You’re never going to please everyone.

My kids decided in order to have the wedding they wanted and to pay for it themselves, that the rehearsal dinner wasn’t for every out of town guest but just the wedding party.

I had a person who was very upset about it. But then again, they are the one who’s upset about everything. Can’t please everyone all the time.

Son and daughter in law also just had the wedding party and family for their rehearsal dinner last month. And even that was 36 people, as most people in the wedding party had spouses that were also included. So, including all the out of town guests as well would have been too much. But, they did have a welcome party after the rehearsal dinner and everyone that had been invited to the wedding was invited to the welcome party. And most people came to that, more than they originally thought might. It was fun and gave a chance for everyone to socialize before the big day.

$2k is outrageous for some things that will go into compost bin at the end of the night.

There is a charity group here that picks up the flowers after events, rearranges them, and delivers them to hospitals and nursing homes. It’s nice that they can brighten up others for a week after the wedding. Not $10k nice, but nice.

I went to a wedding where the greenery on the chuppah was wild grape vines ripped off a relative’s garage. Quite the savings and absolutely lush and beautiful.

Unfortunately the kids hadn’t planned for that either. They wanted to do this themselves and didn’t ask for much help.

My nephew is getting married this weekend and it’s a complete mystery. The kids wanted to elope, her mother wanted a wedding and she’s doing it all themselves. The grooms parents are in the middle of a contentious divorce and aren’t really talking. The groom has no idea, there are no attendants that I know of. No one knows if there’s an officiant.

But at the end of the day, everyone is married. The kids are happy and I don’t really care how it’s pulled off.

Unfortunately we won’t be there as my daughter is having surgery across the country and my husband and I are going to be there with her. Because I’d love to give a report on this shindig

My mother always told me to get married at Christmas because the church is already decorated (and usually the restaurants too). My godfather got married on Dec 26 and my mother said the church was beautiful and it didn’t cost them a thing.

On the other hand, my friend was going to get married on May 7 one year - the day before MOther’s Day. All the flowers were going to cost double. They moved the wedding back a week and saved a lot. Avoid V-Day, Mother’s day to save on flowers.

Definitely personal preference. And of course, dictated by the B and G. In this case, the B really wanted the saxaphone player but like I said, it didn’t look like it went over well. Maybe the venue had something to do with it too - huge ballroom, could have easily held over 500 people and the sax player was lost in one corner.