Just beginning to plan. Looking for any input on either destination. We have airline credit we need to use. Will be going between Feb and Apr. We like hiking, beaches, museums, great food and wine. Prefer staying in towns vs cities. Must do/see? Best beaches and island(s)? Great restaurants?

Whichever location you choose, consider staying in the Paradores. For those who aren’t familiar, the Paradores are hotels located in historic buildings. The program was started by the government in the middle of the last century as a way to preserve and promote these heritage locations. The service is really good and the buildings are very cool. And the price is surprisingly reasonable.

If it was me, I’d choose Andalucia. It’s a wonderful part of the country. Sevilla is definitely worth a visit. I don’t know much about the Canary Islands other then they’re a popular vacation spot for Europeans. Though, I know Andalucia, especially the Costa Del Sol is popular with Europeans as well.

Andalucia from October through April (September/May if you enjoy hot&dry weather). LOTS to do, easy to navigate. Malaga, Cordoba, Sevilla are all fantastic towns/cities. Malaga has beaches. Then you can go hiking in the White Villages of the Sierra. 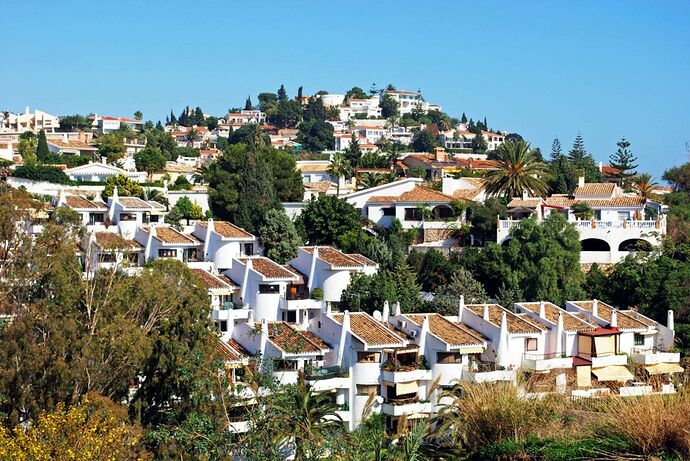 The Alhambra in Granada; the Mezquita in Córdoba; the

Canary Islands would be better for April-June imho.
It also depends on whether you’d be driving or taking public transportation.

If you have an itinerary or specific things you loved, please feel free to PM me!

I haven’t been to the Canary Islands, but do remember my Scottish grandmother going there with her friends for a winter holiday ages ago.

About 5 years ago now, I flew to Malaga with my daughters, as it is very far south in Spain. It was cool that first week in January, but I was thrilled to see Roman ruins for the first time, and the old city narrow streets were beautiful. It was pleasant, and seemed a typical Spanish city on the Mediterranean. We took a day trip by bus to Granada, but I regretted not staying in Granada as it is an art center as well as home of The Alhambra. Give the Alhambra plenty of time to see both gardens and buildings.

Ronda is a well known town we missed, and the Pueblas Blancas sound lovely. Google both. Our time was short.

Sevilla was enchanting and I’d have given it more than our allotted 2 nights.

Agree that Granada and Seville shouldn’t be missed, I think you need a full day for each at a minimum. Cordoba is more underrated but the mosque is just stunning and my favorite to just linger in contemplation.

How are you planning to travel around? We’ve done Andalucia both by train, which is ok but means staying in the main cities (and some fairly long walks, especially in Granada to the Alhambra), and by car. The latter allowed us to stay outside the major cities, eg south of Granada on the coast (though the closest beaches at Motril were nothing to write home about). I would consider a circuit of Seville, Cordoba, Granada, Malaga (or inland to Ronda), Gibraltar, Cadiz and back to Seville. I guess you can also fly to Gibraltar but not sure how car rental works there for travel to Spain.

I only spent a week in Costa Del Sol but my husband and I like this area a lot, plan to come back for a month next year to explore other cities like Seville, etc… We felt we barely scratched the surface this time. We were in the later part of Sept, it’s very pleasant.

We will most likely rent a car. We like the flexibility. Plus, we enjoy smaller towns and hiking etc., which makes it challenging if we’re relying on public transport.

If you are going to rent a car, look up Marbella. We met some guy at a pub and he mentioned this place to us, something about nice boats.

The Alhambra in Granada and the Mezquita in Cordoba

Haven’t been to the Canary Islands, but these places were stunning. I will never forget our city views from this hotel in Granada https://www.tripadvisor.com/Hotel_Review-g187441-d191079-Reviews-Alhambra_Palace_Hotel-Granada_Province_of_Granada_Andalucia.html

ITA . I’ve stayed in Paradores in Spain. They are great places to stay. In Seville, tour the Alcazar. Do not miss the Alhambra in Granada. It is magical.

Having been to both Lanzarote and Tenerife, I’d go for Andalucia. No offense to any fans of the Canary Islands, but to me, they are mainly holiday islands for sun-starved Europeans. It’s very possible I missed the good parts. In Tenerife, I was with terrible company, and in Lanzarote, it was simply a much needed break with me, hubby and our two little kids. I don’t recall anything really interesting on either island, other than great seafood. Sorry again to Canary Islanders!

We happened to be in Ronda on Halloween night. It was so fun. Everyone came into the town square and the kids in costume trick or treated at the stores around the square. The families sat in the cafes and watched. We had some kids ask us to take their picture so that we would remember them. So fun.

I lived in Spain for several years- one of those years in Sevilla. In fact, I’m going there in less than a month. So I’d say Andalucia!

I’d love to pick your brain a bit when I’ve put together a loose itinerary!

Thanks for the input. I think you’ve convinced me not to go to the Islands.

A rental car can be a good way to see Andalucia, if you’re comfortable with driving in a foreign country. One nice thing about renting a car is being able to explore off the beaten path places that aren’t reachable by public transport. One thing to keep in mind, is that summer in Andalucia can be quite hot, definitely something to keep in mind if you don’t like heat. And it always feels hotter when you’re walking around sightseeing.

I would allow at MINIMUM 2 full days in Sevilla, Granada, and Cordoba. We were only in Ronda for a day, which was plenty to see everything we wanted to, but I wish we would’ve stayed overnight as our time there was rushed and we got back to our hotel in Marbella at 11 PM. We stayed in Marbella which was nice, but touristy. We stayed at a nice hotel/resort which had beautiful gardens. I think we were the only Americans there, it seemed to be all Germans. Apparently a German company owned the hotel…Marbella does have a pretty old town area, which is nice and walkable and has some good restaurants. I remember they had a pretty plaza shaded with orange trees. Our hotel was near Puerto Banus which is a very ritzy resort area. We went there one night for dinner and the harbor was full of huge yachts and the shopping was all very expensive.

Also make sure to check out: 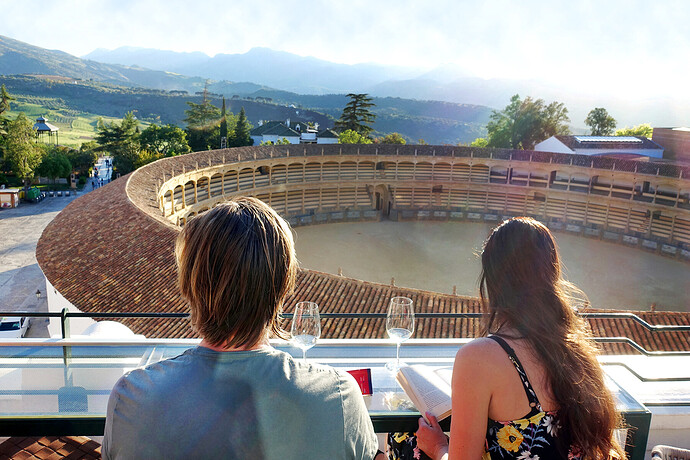 Andalucía’s Hill Towns: Steeped in the Soul of Spain

If you have a rental car, you can hit the places not reachable by public transport. You can even follow a route that takes you through a lot of the towns called the Pueblos Blancos. Definitely worth checking out. And easy to hit if you’re heading from Sevilla to the Costa Del Sol. You could even stay in Ronda and then head out to the smaller towns.

Would definitely recommend Granada and Malaga! Funnily enough, we’re currently planning a trip to Canary Islands next year or in 2024.

We spent 2 days in Granada and 1 day in Malaga. This was a smaller leg of a bigger trip, which in hindsight wasn’t the best plan for Andalusia.

I would recommend staying at least one night in Granada, the Generalife (gardens and grounds) are a half day affair. We booked the nighttime Nasrid palaces tour and it was magical. The attraction tickets do get sold out so it’s good to plan ahead.
On our second night in Granada, we went to see cave dancing in Granada which was a unique experience for us.
We stayed at a small, family operated, inexpensive hotel on the grounds of the Alhambra. Fantastic service in a special setting. We loved it there! We managed to get around by foot and taxis when it wasn’t walkable since we didn’t have a car.
Though, if you like the hustle and bustle of the city, this is probably not close enough to the night life.

ETA: my profile picture is one I took during the nighttime tour of the Nasrid palace.