Another "Boys will be boys" WTH news story

Legal folks, can she appeal and get his conviction back or did this one judge have way too much power? He’s been reassigned, so obviously some folks disagree with his blaming the parents. 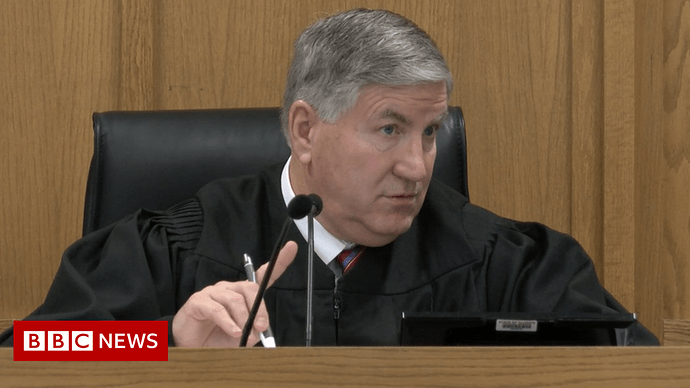 Well, he blamed this one on the parents. The parents didn’t help, but I doubt the parents made the guy do what he did.

I’m still really curious if his ruling stands or if the conviction can be reinstated somehow. It seems really, really wrong for a judge to be able to say they disagree with a conviction so will unilaterally change it.

He blamed the parents, but he backhandedly blamed the girls when he mentioned “co-eds and female people” swimming in the pool in their underwear. So I guess between the parents & the temptresses, a young man can’t be held responsible for what he does. I would think that the victim could appeal, but I don’t know. Even if she could, she’s already been through so much.

I agree and I hope the mandatory sentence will be reimposed. I don’t understand how the judge can unilaterally change not only the sentence but the actual conviction short of some egregious error(s) by the prosecutors or the jury. I’m not a criminal attorney so I don’t know if the prosecution can appeal this judge’s decision but I hope so.

At a minimum I’d sue the defendant in civil court for ALOT of money.

In October there was a bench trial with the same judge. So this is the judge that convicted him then he overturned his own conviction.

I don’t understand how the judge can unilaterally change not only the sentence but the actual conviction short of some egregious error(s) by the prosecutors or the jury.

The DA’s office can appeal. The girl cannot appeal the criminal matter but could sue him for assault in a civil case.

So he now says he’s not guilty just because he doesn’t want the “poor boy” to go to a “big boy jail” for assaulting a girl? This isn’t theft or whatever. She can’t unlive what happened. He gets to go on with life with a slap on the wrist.

What’s to stop a judge from doing the same if someone were to do favors for him? “Oh, I thought X was guilty, but now I’ve had a change of heart.”

Thanks for the info. So in this case, is the judge overturning what he ruled before or overruling a jury?

And will his reasoning bear any weight in the appeal (that hopefully comes)?

There was no jury. In a bench trial the judge hears the case and delivers the verdict. He convicted him then at sentencing he overturned his own decision.
He has now been removed from criminal trials.

Yes, this judge reversed himself. It seems like there really WAS enough evidence to support the finding of guilty, but judge didn’t want to follow the minimum sentencing requirements so he, either on his own or acting on a post trial motion from the defense, reversed the finding.

This isn’t unheard of, but not common. Recently a Colorado judge had to impose a minimum sentence of 110 years in a traffic accident that resulted in 4 deaths. The judge had no choice. Even the DA asked him to reconsider as no one expected that long of a sentence (gee, maybe the DA should have looked that up before charging the guy?). While that request was pending, the governor stepped in and commuted the sentence to 10 years. I don’t think the judge could have reduced the sentence. If the DA would have charged the case better, maybe the sentence would have been 20 years or 25, but the judge didn’t have that option the way the jury decided (juries often don’t know the possible sentences).

It was a bad thing about mandatory minimums in federal drug cases in the last few decades. Some people were found not guilty even if they really did commit the crime because the penalties would have been too harsh and either the jury or the judge knew it.

In this case, because the mandatory minimum was too harsh for the judge, he’d rather the man not be guilty at all. I am surprised that the judge was reassigned even while the decision is investigated. It was his courtroom and the finding within his discretion. Decisions get appealed all the time and usually the judge just goes on with the next matter.

The judge was reassigned because his ruling was contrary to law, and was not within his discretion. In fact, this judge should probably be removed from the bench.

In this case, the defendant waived his right to a jury trial and asked the court (this judge) to be the finder of fact. The judge heard the evidence, applied the law, and found the defendant guilty beyond a reasonable doubt. If the defendant filed a motion to set aside the verdict, the judge, hypothetically, could have reviewed his findings of fact, reviewed the law, and determined that he had made a mistake in his original finding, and reversed the guilty verdict to not guilty. That hypothetical scenario would have been within the judge’s authority. But that’s not what happened. Rather, the judge admitted he was only reversing the guilty verdict because he didn’t want to apply the mandatory minimum four-year prison sentence, and reversing the guilty verdict was the only way to avoid that sentence. Under these facts, I believe the prosecution could appeal this judge’s decision as contrary to law. Normally, the prosecution cannot appeal a not guilty verdict, whether it’s issued by a jury or a judge.

People were all over that judge in the traffic fatality case for the 110 year sentence, but he followed the law in imposing it; he had no discretion to do otherwise. The person who did have discretion, the prosector, should have been more careful in how he/she charged the case. And the legislature should have written a better law to avoid such an absurd result.

The idea that 4 years in prison for rape is “too much” is ridiculous and pathetic. The Illinois legislature established the sentencing requirements. The judge should not be allowed to overrule them. If the defense wants to appeal the sentencing that’s their legal remedy and right.

Cases where defendants are despicable or don’t have a strong defense for a jury, can waive jury and go to a bench trial - guilt or innocence decided by a judge. Usually there is a unique or quirky legal question that a jury would be like “so what” but a judge would get, but that is factual too so not something that can be decided pre-trial. Or the lawyer may know the judge will go easy on certain types of defendants or dislike certain cases, or blame the victim, so will take the chance and go before a judge. Usually when a judge says “not guilty” that is it - there is no re-do or chance to charge again. The article isn’t clear enough legally on the procedural posture, did he set aside his verdict, overturn it, have a new trial? I’m not licensed in that state but it seems bizarre. Usually can’t just throw out a “guilty” finding and say now “not guilty” even if a bench trial in our state. Hope he’s reported to the judicial commission in his state with a complaint and sue the hell out of the boy and his parents. Truly awful.

The story was intended to provoke outrage, and it did. There are things I would like to know and wasn’t able to find out.

He was originally charged with three offenses, and was acquitted of two. What were they? Is there a logical contradiction with this combination? That might explain things.

Also, this isn’t even a he said/she said story. It’s closer to he said/she doesn’t remember. Hard to get past “reasonable doubt” in this case. That’s why colleges often use “more likely than not” as the standard. Accusation is enough for them to take action.

Not hard to get past reasonable doubt in this case. Not a bit and that was not the issue. Colleges use a different standard as disciplinary hearings don’t rise to the extreme level required for criminal cases when people are facing losing their liberty and being imprisoned.