If accepted to both and one had a choice of Arkansas or Auburn, which would you pick and why?

You need to offer more. Major. Where from. Mountains. Do you like the small city, nearby airport, and nature or being in the middle of nowhere. Both can be fine choices but which is better for you, no one could know based on info you provided.

I can give you details, but I am asking for what others liked or disliked about the other.

They do. However, in this particular instance, cost isn’t an issue - GI Bill.

Well four seasons Arkansas will be better. Arkansas is strong in Greek life too.

I’d become a hog but both are fine.

Has your student visited both, talked to kids on campus, etc

Visited both for different reasons. My opinion only:

Haven’t seen either. My kid shotgunned apps all over the place - From UGA/UF to PSU/OSU to CU to Oregon to ASU.
We’ve been to see Wisconsin, UGA, UF, UT - but didn’t really get a feel for the “soul” of the campus.
Your response and the one below are great info.

I visited both schools with my OOS D22. I have no affiliation with either school but will offer my observations from an out-of-state perspective:

Arkansas: Full of OOS kids from the Dallas/Fort Worth suburbs who could not get into Texas A&M and/or UT Austin

Auburn: Full of OOS kids from the Atlanta suburbs who could not get into University of Georgia and/or Georgia Tech

Auburn alums have a very strong presence in Atlanta (over 25k in the Atlanta Auburn Club alone), whereas Arkansas alums do not appear to be as numerous in Dallas/Fort Worth.

Auburn seemed to exude a more “serious student vibe” than did Arkansas.

I realize every school (especially SEC schools) likes to think that their students and alums have the most pride, spirit, and love, etc. for their alma mater, but at Auburn it was palpable. We continually heard throughout our time on campus from students, staff, and faculty about the “Auburn Family”. Everyone affiliated with Auburn acted like they were truly happy to be there.

Auburn has fraternity houses but does not have sorority houses. Sororities have meeting rooms in residence halls. I have no opinion as to whether that is a pro or con.

Arkansas Greek houses are spectacular and live up to the southern university hype.

I thought both Arkansas and Auburn had beautiful campuses.

Unlike Fayetteville, there are no direct flights to Auburn. We flew to Atlanta and drove 100 miles to Auburn. There are also flights to nearby Montgomery, Alabama (60 miles) and Columbus, Georgia (36 miles).

As we all know, it ultimately comes down to fit and personal preference.

As for Auburn, let your potential student read the Auburn Creed below. We were told on our tour that it is honored and revered by everyone in the “Auburn Family”. If it causes a swell of pride when he/she reads it, then Auburn may very well be the place. If it is met with an eye roll and deemed corny or a “little much”, then I would suggest scratching Auburn off the list. 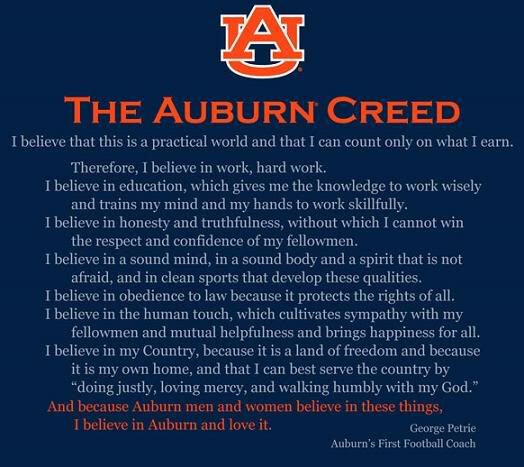 In my area (about equidistant to both) Auburn is considered to be stronger academically. Many of the kids that applied EA there this year have been deferred.

Awesome info, thanks! The DFW/Atlanta stuff was pretty funny.
I’m pretty sure she wants a real sorority house.
And she read the creed - no eye roll, no excitement; more of a “cool.”

Yep, daughter was deferred from Auburn (debating how hard to fight to get accepted…thus the thread). Funny thing is, overall, Arkansas has a lower acceptance rate