See updates and discuss results with other Bowdoin College applicants.

To discuss other Bowdoin College topics visit the bowdoin-college tag on CC Forums.

This post is a wiki and allows CC members to edit and update relevant information - just click the Edit button in the lower right corner. (You must be a registered user with at least Member level privileges to edit wikis).

This thread is so quiet! Congrats to everyone who got in today!

It is very quiet. My son got accepted!

Congratulations! Ours did, also - relieved and happy!

Me too! Do you know if there’s an instagram group for the class?

I’m not sure about an instagram group - there is a facebook group for parents from all classes though, that is very informative. Our freshman will be joining their sibling at Bowdoin, a junior.

I think Bowdoin will set up a Class of 26 Instagram page eventually. Not sure when that kicks in. You can call admissions and ask. Congratulations and welcome! Our junior is having an amazing experience!

Does anyone know how many ED applicants Bowdoin accepted? It seems like a very small group. There are only about 60 people on the 2026 IG.

Not sure but they accepted 242 last year in both ED and ED2 combined.

I know Bowdoin doesn’t publish how many students they defer, but does anyone know a ballpark?

This may have changed, but I think Bowdoin deferred almost everyone they didn’t accept. Their past practice has been to reject very few during ED. (This is quite common. Bowdoin is not alone in this approach. )

does anybody plan on applying to bowdoin ed2

I am considering applying to Bowdoin EDII, but finding it difficult to impossible to figure out the potential “bump” in admission for EDII vs EDI. Any sense of how many have been accepted in EDI?

As lovely as Bowdoin is, they’re less transparent than a lot of elite schools regarding their admissions process. I’m guessing about 125-150 were admitted under ED1. As with any school, there are less ED2 applicants than ED1 applicants, and there is most likely a somewhat lower acceptance rate for ED2. I’d guess that 15-17% of ED2 applicants are accepted (as opposed to 21.5% for ED1). I’d venture to say that 60-70% of ED acceptances are accepted under ED1. You can do some quick math and figure the numbers out.

This is speculation, but my friends and I have a theory about early admissions at elite schools. Even despite the enrollment differences at elite colleges (Harvard, Yale, Stanford, etc.) and elite LACs (Bowdoin, Amherst, Williams, etc.), there are a similar–not proportional–number of athletes. I’m not exactly familiar with recruiting practices for either type of institution, but I know that a significant number of recruited athletes apply under ED/EA. Taking all of this information into consideration, I believe that athletes make up a much greater percentage of students accepted under ED/EA at LACs than they do at Ivies/elite colleges.

If anything I’ve said sounds incorrect, please update the thread. I don’t want any anxious HS students believing these are facts! Especially if they don’t somewhat resemble the truth

I don’t know of any of Bowdoin’s peer schools that breakout EDI and EDII acceptance rates. Hamilton used to, but I haven’t seen that for a few years.

The Ivies have a greater number of recruited athletes, but of course their student bodies are larger than the NESCACs’. Harvard’s recruited athletes are estimated to make up about 10% -12% of the class. It’s not clear to me if that includes full and soft support recruits. 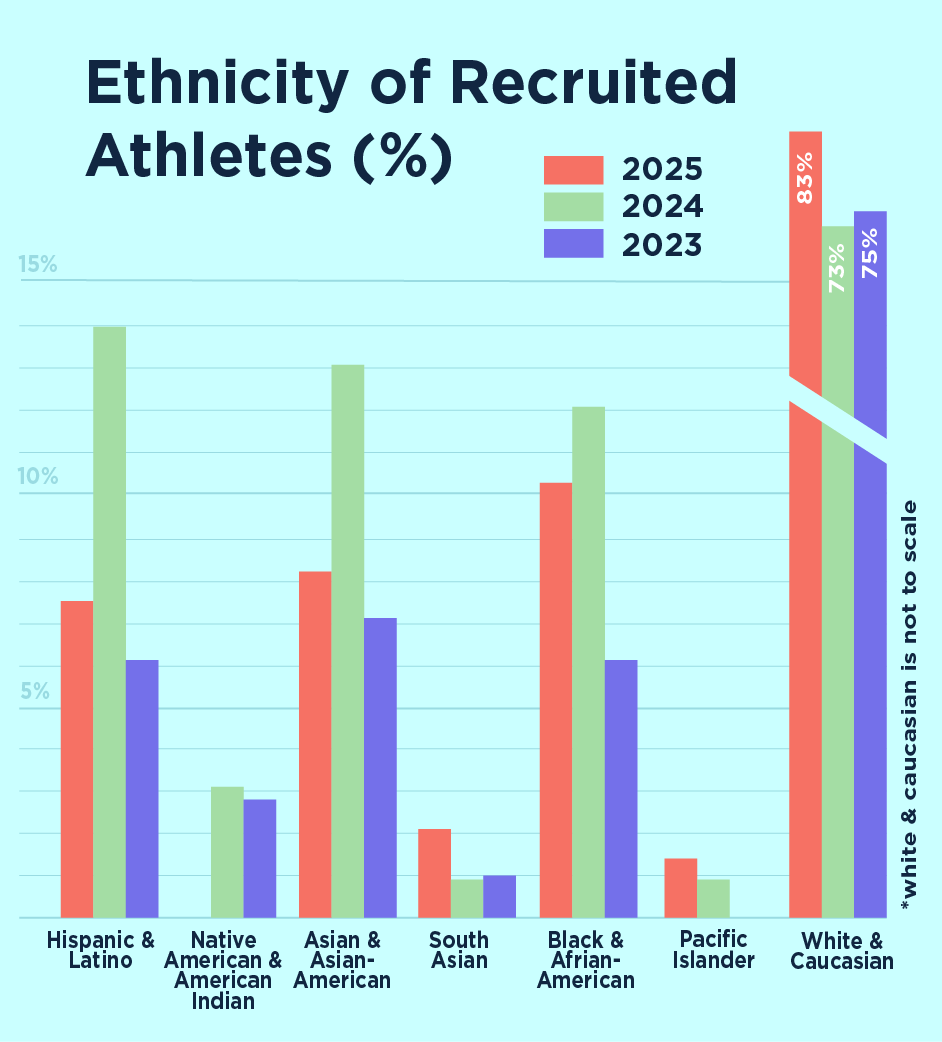 One major subset of the Class of 2025 — recruited athletes — is more predominantly white than in previous years, according to the results of The Crimson’s annual freshman survey.

Mapping The Hometowns of Harvard’s Student-Athletes

Where are our student-athletes from? How do the hometowns of different sports’ athletes differ?

It’s also true that the NESCACs have a greater proportion of the student body playing varsity sports (30%-40%) than do the Ivies (20%ish), as all of these schools rely on walk-ons to fill out their varsity rosters.