We are from NY.
Cornell CALS (NY Funded) is test blind(won’t look at all scores).
CAS is test optional (and super scores).

DC’s single SAT is 1560 and superscore is 1580. DC is going to major in biology. We want to maximize the chances for DC’s acceptance into Cornell.
Test-blind CALS may get more applications.

Which one is less difficult to get in? Keeping money on the side, which one would you recommend for DC? (CAS or CALS)

CALS may be slightly easier, but if you don’t like the majors offered there, you can not easily switch over to another school. You need to apply to another school. For this reason, if you are ambivalent about which school to apply to at Cornell, CAS is the safer choice. Cornell is unlike other Ivies, which are, for the most part, liberal arts institutions. Cornell, on the other hand, and except for CAS, is pre-professional, so this needs to be heavily weighed prior to considering schools within Cornell. But CALS has the best Agricultural School in the world, hands down (!), though it does offer majors not in Agriculture, of course, such as AEM.

It is actually fairly easy to change schools/majors within Cornell, but I definitely would not apply to a College at Cornell just because you think you may have an easier chance to get in. They see right through that.

It is fairly easy to ‘apply’, but not fairly easy to get in. For example, Cornell Dyson has between a 3-8% acceptance rate for inter-school transfers. Friend was just denied.

Cornell wants to see students aligning with their individual college’s mission. CAS and CALS are not interchangeable.

I’d recommend looking up the 4 year plan of study and seeing which aligns better with the student’s interests and ECs.

IMO, your best bet of acceptance is to the college that fits the applicant.

Maybe because that student wasn’t the best transfer applicant, but generally speaking, it is not that difficult to change between majors/schools. My daughter has numerous friends who have transferred between schools with little effort.

Additionally, it is also very easy to double major across certain school and minor. My daughter is getting a Dyson Minor and didn’t need to do anything extra in order to get that minor as far as applying or anything, so you may want to tell your friend that didn’t get the transfer, they may just be better off going that route. It’s also very little extra effort to get the minor.

Your information does NOT apply to Dyson. Dyson is like Wharton, only with a lower acceptance rate: 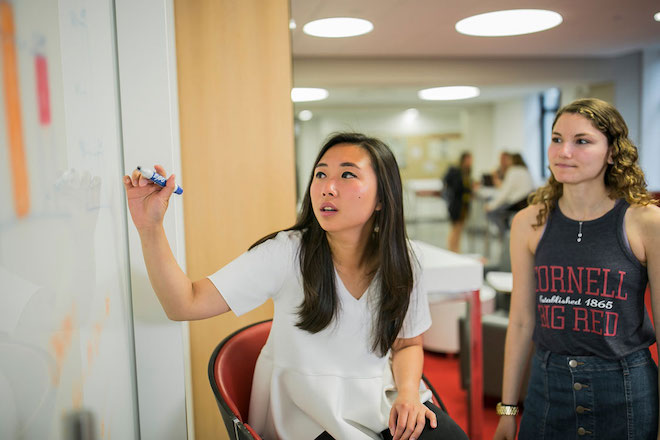 Poets&Quants For Undergrads | Acceptance Rates At The Top Undergrad...

Anyone can minor in anything - no application process for that. But Dyson is as competitive as Harvard if you go by acceptance rates and most all Cornellians are aware of this and do not apply as freshman and instead apply to ILR or the Hotel School, which have much higher acceptance rates. And my friend is an excellent student with sky-high test scores, otherwise he would not even have attempted to apply. It is also known among Cornellians (and the good majority of high school undergrad business applicants) how ridiculously difficult Dyson is to get in. Most do not even attempt it due to the much lower acceptance rate than Cornell, overall. This is from Cornell’s own website for ‘Internal Transfer Applicants’ to Dyson:

“Internal transfer admission into Dyson is extremely competitive and therefore not all applicants who meet the criteria below are accepted.”

So, Cornell is an Ivy League school and they are stating that, among Ivy League students, Dyson is ‘extremely competitive’ to get into. I think that says it all and puts your theory that it is generally ‘not that difficult’, to rest.

Dyson is not even close to Wharton and you cannot compare it as such. It has a low acceptance rate really because they have a lot of applicants for so few spots, while Wharton is a much bigger program. Look at the rankings of top undergraduate business programs. While Cornell’s is ranked 7th, it is actually tied for 7th with 3 other schools. Additionally, ahead of Cornell other than Wharton, is Berkeley’s top business school (public), Ross Business school at UM (public), and McCombs at UT (also public).

Sounds like your friend went into Cornell as another major hoping to transfer to Dyson and it bit him in the ass. Test scores are not what they necessarily care about when transferring. They look at what you do once in school too. Business Consulting Clubs, grades, etc. Not, test scores from high school which are not relevant now. Also, every school in writing at Cornell will say it’s not a guarantee transfer because they have to. But if you do the right things and are in the right activities and such, you can get into Dyson. However, someone can just as well major in Economics in A&S (which is what students do at UM when they don’t get into Ross) and get the same jobs at Goldman Sachs, and other Investment Banking firms as the ones who are in Dyson, so if that’s where his interests are, that is what he should look at or as I said previously, go the Minor route and no not everyone can so easily minor. You need to go through a process for it and get it approved as well.

Salty much? I was addressing your initial statement that Dyson is an ‘easy internal transfer’, but instead you started trashing Cornell AEM (rather odd for someone posing as a Cornell parent). I was stating acceptance rates, but you start stating rankings. Rankings and acceptance rates are two different animals. But just fyi, just as many Wharton students are denied each year from Dyson as the reverse and Cornell was the only school in the top 10 to move up last year in the ranking you cite. Most students at Cornell, perhaps including your daughter, would not have been admitted to Dyson as freshmen, if you go by their published acceptance rates. I do not know where your anger and profanity comes from, unless you daughter was wanting to be a Dyson student herself. And you also claim superfluous knowledge of admissions (and how would you possibly know?!), but their criteria has no bearing on the final acceptance rate. It is never higher than an average of 5.5%. It is half of what Cornell is, overall.

It has a low acceptance rate really because they have a lot of applicants for so few spots, while Wharton is a much bigger program.

I understand now why you are confused by acceptance rates. Program size has nothing to do with percentages. This is elementary math. It is called fractions.

Uh actually it’s a lot simpler than that. If you have 10 spots and 1000 people apply then you’re program is going to look a lot harder to get into than a school that has 100 spots and the same 1000 applicants. That’s common sense and you can look up those application stats to confirm that. If you dig really hard, you can find the pdf document of all breakdowns for the Cornell numbers for specific schools over many years. But it’s only available as a pdf doc.

And no I’m not salty and no my student that goes to Cornell did not have any interest in applying to Dyson. She is in COE and that “posing” as a Cornell parent comment is pretty funny. Why are you even in the Cornell page when you have nothing to do with Cornell? If you want to talk about schools moving up in the rankings which is stupid argument, it is kind of hard to move up when you’re already #1. Comparing Wharton and Cornell is the issue you seem to have a problem with. Cornell is a good business undergrad school, I’m not disputing that, but the point is, it is not Wharton. You seem awfully bitter about the whole thing that Cornell is not >than Wharton business school or many others. It just is what it is. It’s really not a big deal.

Look, it’s like any other school. Some programs and classes are great, and some are lousy. My kid has had some great classes and professors there and some lousy ones. She had a class this past semester which coincidentally was a Dyson course and said it was the dumbest class she ever took and she didn’t learn a thing. It was required for her (and is for every Dyson major). She has also had classes in her own major that have stunk. The flip side, she has had phenomenal classes too. You’re going to find that anywhere regardless of a program being a top program. As a parent, it’s disheartening to hear a kid say a class was a waste of time and they didn’t learn a thing, and it’s not because she knew it beforehand. She didn’t. She wanted to learn something. Her other Dyson class this past semester was great. But again, it’s just how the cookie crumbles.

At the end of the day, really sorry your friend, or whatever he is to you didn’t get his internal transfer to Dyson. Maybe he thought it would be a shoe in but nothing is ever a shoe in and hopefully he didn’t go there with that in mind as that’s one thing they usually catch onto fast and there are other courses that one has to take to in their own respective majors that may hurt when they transfer. Also, almost any kid at Cornell has a top test score and top grades in high school. I’m sure your friend will tell you that Cornell is full of super smart people. There are some who may not really belong, but the bulk are super smart, study like crazy, and engaged in a ton of activities. He will figure it out and it’ll work out for him. Dyson is not the be all to end all and he should not worry about not getting in.

Once you understand percentages and fractions, let me know. Your initial statement saying its “easy to transfer” into a school that Cornell says is extremely difficult to, shows you have no respect for facts.

I don’t have time to read manifestos.

You’ve both expressed your position. Agree to disagree, but move on.

Appropriately for a discussion involving Economics, I think the regarding selectivity answer is “it depends”.

If we assume
(1) there is a single measure of merit and
(2) Wharton is higher on the ladder of desirability than Dyson
(3) they are the two highest ranked, to make it simple
then Wharton will accept 100 students to get 100 attending, and Dyson will have to accept 110 students to get 10 attending – the 10 that they admitted who were not admitted to Wharton.