We know the basics: Everyone had to get vaccinated; Masks indoors; Not so much outdoors; Varsity sports, live theater and the Film Series are back. But, what’s the situation on the ground (And, yes, this thread could sound familiar: COVID restrictions at Brown University) really like?

BULLETIN Dr. Scott Gottlieb 94 Hon.21 just stated on CNN that with the growing likelihood of COVID-19 evolving into “a seasonal respiratory illness” along with the flu, that “many of the practices we have put in place - indoor mask-wearing during the winter, adjustments to air filtration systems, social distancing measures in the workplace” will become permanent features of society, especially in the winter.

This has been a remarkably uncontroversial thread, so I’m goosing things a little bit by adding my own color commentary to this recent Argus article:

With campus seeming and feeling like the most normal it has been in months, being up to date on the latest trends—at Wesleyan and at large—is a must as the semester gets underway. That’s where this Washington Post-inspired Ins and Outs list comes in. This year marks the return of The Argus version that is once again guaranteed to get you clued up on what’s hot right now and what’s really not.>
The Wesleyan Argus | What’s #trending: Ins and Outs for the Fall Semester

That’s Wes speak (Wespeak) for the old Public Affairs Center which is being gutted and remodeled versus a tent tucked away in the arts center for outdoor classes.

Two coffee house outside contractors operating inside the campus bookstore. One swapped out the other just before the pandemic.

Star and Crescent - out / Eating at the Inn - in

That’s Wesleyan’s last remaining eating club (attached to Alpha Delt) versus The Inn at Middletown, the kind of place you would invite your parents to stay when in town. The Inn is taking some of the overflow from Wesleyan’s recent over-admit (and, the food is not bad.)

Netflix and Chill - out / The Film Series - in

Not sure I agree with this one. I was at, what I presume was the premiere showing of “In The Heights”, last night and there were barely 50 people in a state-of-the-art auditorium with dolby surroundsound sound - free of charge. Think about that for a moment: the pinnacle American artistic interpretation of a storyline created literally yards away from where I was sitting and nada.

Netflix for the win!

that “many of the practices we have put in place - indoor mask-wearing during the winter, adjustments to air filtration systems, social distancing measures in the workplace” will become permanent features of society, especially in the winter.

On the business side, I think it’s well settled that we have all proven that we can get the same amount of work done from home as in the office. Some companies, like my own, report higher levels of efficiency. There are concerns about losing the culture, etc. etc., but I think flexibility in terms of physically being in one place is a permanent change. Of course, physical presence is a basic requirement in some businesses. But I’ll say this: I’m glad I don’t have large amounts of my retirement funds in office property REITs. Are downtown office buildings ever going to be full of corporate tenants again? I see a lot of those buildings being converted to condos eventually. But even then, half the fun of living downtown is walking distance to great amenities, and many of those amenities are there because of the daily corporate population that spills in. It’s not quite the same proposition it once was.

All in all, I don’t see how there won’t be some amount of permanent change. We’re going on two years of this. It’s going to leave a mark.

My friend the Wall Street analyst avoids the office like the plague (I mean, literally like the plague); decries the lack of transparency around outbreaks (no one outside of direct contacts ever gets notified) and considers himself lucky to be able to eat at his own desk on days when he has to be there.

One of my Middletown neighbors stopped me on the way back from grocery shopping because I still had my mask on and we joked about all the calculations we make when and where we “mask up”. We agreed that a lot of it has to do with showing respect for others. Seven months after my second shot, I’m still mildly reassured when I walk into a store where a majority of the shoppers are wearing masks.

I am going to be attending a few football games in the coming weeks. I’d by lying if I said I am not thinking about it. One is a commitment and plans have been made and I don’t feel like I can back out now. The other, the Brown/Princeton fb game, is discretionary, but I do want to go and see my D.

I am a Pfizer vax and am now wondering if I ought to get the booster, or if I can even get it. That’s to say, I still think about it.

I’m with your friend. If I don’t ever have to go back that’ll be more than fine with me.

My D is likely going to start her career with one of the Boston-based consulting firms. I wonder what life will be like for her.

My D is likely going to start her career with one of the Boston-based consulting firms. I wonder what life will be like for her.

She will likely live in a big house😀. Sarcasm intended and congratulations!!

The Argus seems to recognize the importance of this moment with at least one article a week devoted to life at Wesleyan during COVID. This one details life at The Inn, the downtown hotel where approximately 174 students have taken up residence. I couldn’t help but noticing that not one student listed a/c as a perk: 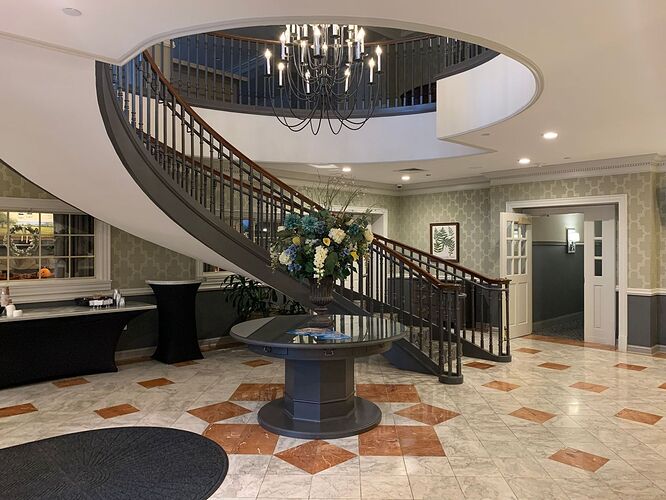 An Inn-side look at the Middletown Inn

On the other end of the spectrum, there’s this article from a week earlier, detailing “invasive” procedures on the part of Public Safety in enforcing occupancy limits in the university-owned “Wood-Frames” on Fountain Avenue, the center of the weekend party circuit:

(Campus Safety Director, Scott) Rohde acknowledged that this year presents a unique challenge: things aren’t back to normal completely, but enough rules have been relaxed that a semblance of freedom has been restored. This makes PSafe’s role more difficult, and tougher for students to understand.

“What we’re seeing is a little bit of a hybrid still out there where it’s not back to complete normalcy pre-COVID,” Rohde said. “So we still have some of these enforcement issues about occupancy numbers and that, but we are beginning to return to seeing more normal-type activities.” 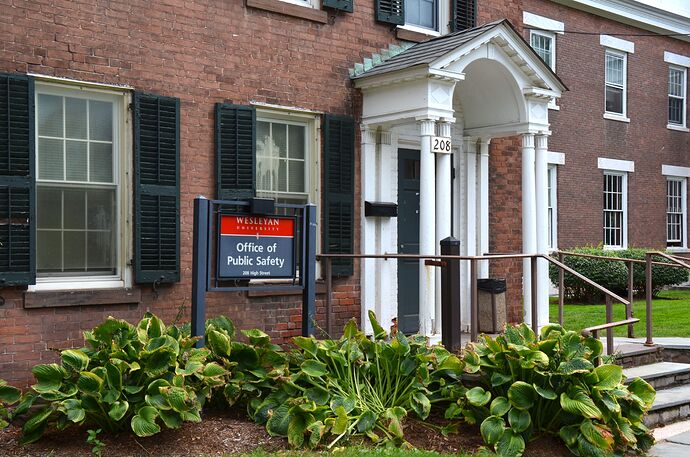 “We’re taking it slow with a few seats, just to get everyone comfortable with the idea again,” Thorndike said. “It’s been a long time since we had inside dining. A year and a half or more since we’ve done this. But it feels good. It’s a nice sight and comforting to see it. Even if it’s in small amounts.”
The Wesleyan Argus | Indoor Dining Reopens at Pi Café, WesWings, and Red and Black Café

This week brought the return of:

(Dr. Tom) McLarney approximated that nearly 60% of the people that have been seen by the health center over the past month have come in with WesPlague. Although the common cold occurs on campus every year, McLarney reported this year has been worse than last year due to the University’s relaxed COVID-19 policies this semester. There has been an increase in student socializing, which has allowed old viruses to reemerge.
The Wesleyan Argus | WeSick: WesPlague’s Effect on Students’ Academic Lives

The January session has been virtual. Spring semester in-person classes will be delayed from Thursday the 27th and Friday the 28th until the following Monday, January 31st in order to give arriving students time to re-commence weekly testing. On those two days, classes will be virtual:
Delaying Start of Spring Semester – January 4, 2022 – Coronavirus/COVID-19 (wesleyan.edu)

Star and Crescent - out / Eating at the Inn - in

That’s Wesleyan’s last remaining eating club (attached to Alpha Delt) versus The Inn at Middletown, the kind of place you would invite your parents to stay when in town. The Inn is taking some of the overflow from Wesleyan’s recent over-admit (and, the food is not bad.)

Tell me more about this. Is it permanently shut down? I had never heard of eating clubs during my D’s 4 years at Wes.

That’s too bad. She’s probably passed by it a couple of thousand times.

Back when dinosaurs roamed the earth, every upperclassman (and they were literally mostly men), I knew ate at a eating club. They didn’t necessarily have to join the house that ran the kitchen, but the clubs seemed to fill a definite niche in the culinary habits of the college. Difficult as it is to imagine now, Wesleyan had only just completed building its first dining hall seven years before I arrived.

But, as fraternities began to fade away one by one, so did the kitchens attached to them.

And, you’re right. Apparently, marketing has been an issue:

Fish also emphasized this need to market Star & Crescent, as the restaurant tends to be more popular among upperclassmen.

“I would have eaten at Star & Crescent if I had known about it when I was a freshman,” Fish remarked. “Upperclassmen tend to know about it more so than the entire student body, and I think that everybody would benefit from knowing about it and being able to eat there.”
The Wesleyan Argus | Star & Crescent Has Successful Start to Spring Semester

They were take-out only for Spring `21. The only reason they are closed now is because of a COVID related disagreement with their chef of 16 years (!) They have big plans for a grand re-opening, complete with indoor dining, this semester:
The Wesleyan Argus | Star & Crescent Closes Temporarily After Chef Departure

On a personal note, I’ve just come back from Middletown and the entire campus has a collective case of spring fever as temperatures briefly touched 70 degrees on Tuesday. These dizzying, early signs of Spring are an annual ritual in southern New England.