Current Broadcast TV shows: what to watch/avoid? + discussion with spoilers

I’ll look for it… I didn’t see it but was he the guy complaining he was hungry because he’d been on a juice cleanse (or sth like that)? I thought it was Day 2 but it’s probably because I missed on episode! BTW what was that huge animal supposed to be?

Nice recall! He was actually 2 people in front of our juice cleanse guy. 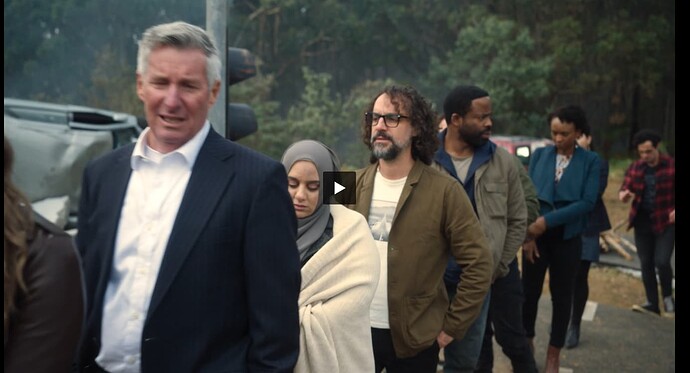 Big leap didn’t sound very appealing, anything that makes it interesting? For reference I don’t watch Dancing with the stars and don’t see how it’d be possible for untrained adults to tackle a classical ballet. So, I figured, too much suspension of disbelief for a slice of life show.

I think the cast and story lines behind the different characters are what make it entertaining. It is kind of like saying that one wouldn’t enjoy Glee because they don’t sing or go to high school. Again, it was a surprise for us. I record all new shows and watch the first couple of episodes. For this one, my husband was kind of half listening but stopped what he was doing and watched the rest of the premiere and has watched it each week since.

Thanks! I will give it try then.

Okay, just watched episode 2 of LaBrea: too much foolishness on par with “running in front of a tiger when you’ve got a perfectly good vehicle to lock yourself into”: guy falls off a cliff “on his back” and is paralyzed, and they move him, try to make him walk, rather than try to hide him and come back for him later with reinforcements? I am not a doctor but I know you don’t try to make someone who hurt his back walk (or am I wrong?? Because, not a doctor… just makes sense to me that if the spine might be hurt, you’re super careful.) Not securing or organizing the food. Not tracking who’s there so they know they’ve not been taken. Not saving their phone’s battery (useful for its flashlight, not just entertaining kids). Not looking for water (surely they know the bottles won’t last forever). Not helping the kids bury their dead dad?!
I am not a survivalist (like, opposite of) but the people seem so clueless. It seems logical to me: first, solidify shelter because at night animals can find you so you may be super hungry and thirsty but at least you won’t be vulnerable and eaten in your sleep. Then find water and find a way to store it. Finally, secure/protect food. Always move in groups of 2 or more (see: animals, prey). I understand they’re in shock or in a daze but I can’t believe they’re that clueless and disorganized, just milling about like this in what is clearly an area of total wilderness. Are they going for “courageous but dumb people”?
So, am unhappy with this episode even as a “background show”.
To be fair, the part in LA was good.
Will now go back to Episode 3 and hope they wake up a bit.

Yeah, good luck with the wake up a bit.
Remind me to invite you if I ever go on another camping trip.

That’s the weird thing though, I’m not into camping and I’d likely be useless. I thought the above was just common sense.
Also why do they seem to think being a premed drop out gives you medical knowledge? Being premed has nothing medical about it, it’s not a first aid course. Couldn’t the girl be a nursing student at least if they want her to know something medical-related? Yes episode 2 was irksome and I’m just 5mn into episode 3.

Wednesday shows discussion is open! The Wonder years, The Conners, Legends of Tomorrow, Awkwafina is Nora from Queen’s, New Amsterdam, Stargirl (etc., tried to cover many genres and channels :p) episodes 1-3 or 4 discussions are on

oops… I don’t watch superhero shows but I wanted to make sure they weren’t excluded.

This thread could be “thread for not super popular shows you might be tempted to try and are sucked into”.

I watched only Survivor last night. I enjoyed that and was sad to see JD go home.

Dude! Survivor has its own thread. Maybe keep the spoilers there?

For anyone that watches One Chicago, am I alone in thinking PD is the weakest in the franchise? My opinion seems to be an unpopular one on other boards, and TBH, I would drop in a heartbeat except for the interminable crossovers with the other shows.

I only watch Chicago Fire. It’s like a soap opera with clever and sometime bloody disasters. Addicting. I try to catch the crossovers but if I miss them, no big deal.

I too don’t like crossovers; I find them confusing.
I think I’d like them more if I were really into the shows that had these crossovers, because I can see how having characters leave their established universe and work in another one can be fascinating&exciting for hardcore fans v. casual watchers who put the show on as background while working? Not fun. Like, getting really confused because there’s no continuity and realizing the plot has advanced through the crossover show, whose characters I don’t know and whose plotlines I can’t follow*.
I do see how the Chicago universe could be one giant crossover.
Is it actually shot in Chicago? I remember the Good Wife annoyed Chicago people for being obviously shot in NYC.

(*Particularly annoying was an episode of Grey’s anatomy when a major character died and without @skieurope telling me it was related to a Station19 episode, I would not have been able to figure out their storyline.)

I do see how the Chicago universe could be one giant crossover.
Is it actually shot in Chicago? I

Yes. In addition to the exterior shots (Firehouse 51 is the real CFD Engine 18), the soundstage is at Cinespace Chicago. One recent less-than-ideal change is the balcony scenes on Med are shot in front of a very obvious green screen due to new construction occuring in the IRL location.

Particularly annoying was an episode of Grey’s anatomy when a major character died and without @skieurope telling me it was related to a Station19 episode, I would not have been able to figure out their storyline.

WAY back in the 80s or 90s there was a short lived sit com whose lead character was a Providence RI doctor. Every time he stepped out of the office we saw mountains and palm trees.

What made the series Providence realistic is they would start every season filming outdoor scenes in Providence and sprinkle them in throughout the season. Indoors = studio located anywhere. Outdoors=actual Providence.

Who designed these sets and had they ever been in New England?