That’s huge - because during my son’s recruitment two years ago, they were over the top pushy.

I may be wrong here, but I am pretty sure WASHU is the last T20 to drop demonstrated interest.

Well, they fill 60% of their class Early Decision. I guess they’re decided to make that the only meaningful way to demonstrate interest!

I believe Rice still considers demonstrated interest (to respond to the statement about other T20’s) but they’re skewing more toward ED also so maybe a similar shift will be coming.

That’s huge - because during my son’s recruitment two years ago, they were over the top pushy.

I am not sure I understand your comment. I believe the announcement is as simple as it sounds, they are no longer factoring demonstrated interest.

You use the term “recruitment” was he a recruited athlete, was he offered admission, did he chose to attend, what constitutes “over the top”?

If he was an ordinary kid who got a ton of contact solicitations from Wash U that likely won’t change (in fact they may now reach out to even more kids in an attempt to cast a broader net).

For example U Chicago doesn’t factor demonstrated interest but they very actively solicit and encourage high stat kids to apply particularly ED which is the ultimate display of interest. That allows for a low single digit RD round. My guess is that is the model Wash U is moving towards.

For a school with a very high number of applications which offers ED 1 and ED 2, this announcement is a minor development in my view. Tracking interest is just a form of yield protection.

The more interesting part of the referenced WashUStL bulletin is found in the last paragraph about those receiving punishment for participating in a demonstration. This is a way to encourage apps from activists. (Maybe WashUStL will become the next Berkeley or Columbia.) (It would be interesting to know the professional & educational backgrounds of WashU’s admissions officers.)

By that I mean, and maybe I’m a bit off because it doesn’t impact ED as @Publisher points out, they were more aggressive to us than even American - emails, mailings, phone calls - you name it - pushing ED - and how you can no better demonstrate interest than apply. Perhaps this is because we visited - but did apply - RD and my son was waitlisted. Perhaps it’s because as an elite private schools, they have a larger and more organized admissions staff.

My daughter expressed no interest other than being on their email list. And late in the game, like December, they offered a free app - clearly intended to goose their app #s.

I do think it’s great though that they won’t use DI. But in theory anyone who admits a higher percentage of ED is using it.

I got excited at what sounded like a major change but I guess it’s not. American and WUSTL were the two schools where I felt each of my kids (each applied to one) had to waste more time doing dumb “additional” things to show the love - and I guess that will no longer have to be the case for kids - so in that sense, I guess it’s good.

The more interesting part of the referenced WashUStL bulletin is found in the last paragraph about those receiving punishment for participating in a demonstration.

I have no idea if this is a new addition for WashU, but many colleges, including Harvard and Georgetown, specifically addressed this question in the wake of Parkland. If new for WashU, they are late to the party.

For ED - do you think it will be harder to get in ED now or will the same percentage of the class still be accepted?

Duke does not, per the CDS, and has not for a while.

Vanderbilt also does not “initially” monitor interest but clearly states it is considered when reviewing wait lists.

Northwestern from what I could find does still “somewhat” consider it per the CDS.

Agree, at least as of last spring (and presumably at present), Rice was definitely tracking demonstrated interest. D22 and I attended one of those 5-schools-in-1 webinar programs, with AOs from Rice, Yale, Michigan, and a few others that I don’t recall. During the Q&A at the end, someone asked a general question for the whole group about whether these top schools track interest, and the Rice rep enthusiastically jumped in to say, “Yes, we do track demonstrated interest! Send us an email, and we’d love to have you visit campus!” There was an awkward silence after that, and finally one of the other school reps carefully responded, “I think some of our schools don’t really have the processes and systems in place to track that, so we focus on other factors,” and every other rep chimed in to agree. The Rice person seemed unaware that they were an outlier on that issue and tried to soften it a little, “that’s just one of many factors,” etc.

We’ll never know - but I wonder if it has anything to do with the fact that due to covid it is likely that fewer people are interested in traveling to visit colleges, doing in person interviews etc.

Duke does not, per the CDS, and has not for a while.

According to the CDS on their web site, it’s been “Considered” since at least 2013 (their posted 2012-13 CDS is wonky and doesn’t show that data.) Is there a different CDS? 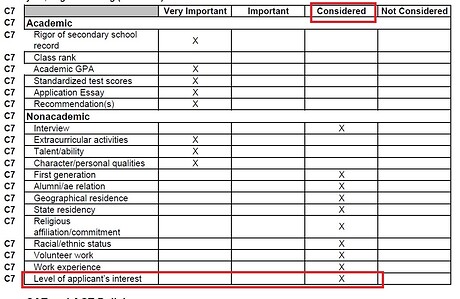 I am pretty sure WASHU is the last T20 to drop demonstrated interest.

In addition to Duke, Northwestern, Michigan, Notre Dame, NYU, Penn, Rice and Dartmouth also list it as “Considered” on their 20-21 CDS. Surely at least some of those are considered T20.

Wash StL considered it “Important” two years ago, down to Considered last year.

Thanks for the correction!