This also looks good to use up some of the plentiful tomatoes, eggplant and squash from the garden.

This is one of the simplest Provençal gratins, a dish that takes a little bit of time to assemble, then bakes on its own for 1 1/2 hours It tastes best the day after it’s made.

This is great particularly if you have an instant pot. But you could make it a Dutch oven. https://www.paintthekitchenred.com/instant-pot-ratatouille-eggplant-zucchini-bell-pepper/

Well I made this recipe that @BunsenBurner posted above and it was outstanding! It was good with all the toppings but honestly I could have eaten the eggplant jist roasted with all the spice mixture - it was delicious and flavorful!

Give it a try!

I have a confession to make: I have a hard time considering eggplant a summer vegetable. I know that it grows in the sunshine, right in between the tomatoes and the basil, but its silky, melting texture is what I want in wintertime. It’s light yet...

Thank you for reporting! Glad you liked it! It is on my list of eggplant dishes to try. I made yet another batch of the Serious Eats caponata. Eating it as we speak.

I have made this several times. It’s unbelievable how good it is!

This won’t help you until you get an oven, but we like to roast a whole eggplant, cut it in half, then mix the soft guts with tahini.

Do you all leave the skin or skin your eggplant. I actually prefer the bite of the skin.

I often just grill eggplant with some olive oil and top it with a bit of yogurt, sesame seeds and zahtar spice. (It’s on the cover of Ottolenghi’s wonderful mostly mideastern food cookbook Plenty), but given that you don’t like baba ganoush I’d suggest another recipe of his from Plenty More which goes in a Japanese direction. It’s absolutely delicious. You steam it and top it with a sauce with mirin, soy sauce and spring onions. 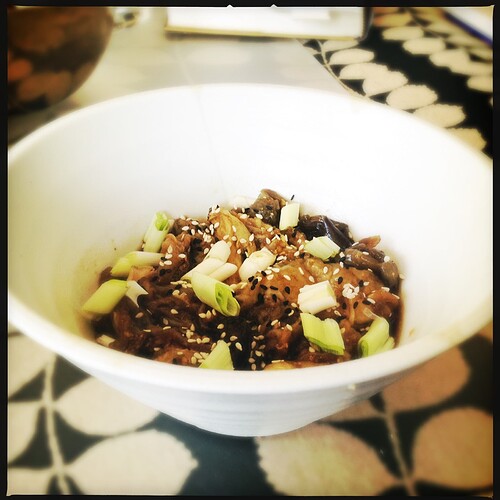 Fill a large pot (for which you have a lid) with water to a quarter of the way up the sides and bring to a boil. Place the eggplants in a steamer or a colander hovering over the water, making sure the water doesn’t touch the base of the steamer. Cover tightly, using foil to seal the edges if you need to, and steam for 30 minutes, turning the eggplants once.

When the eggplants are cooked, remove the steamer from the pot and leave the eggplants to cool and drain inside the steamer. Shred the flesh by hand into long, thin strips 5 mm wide, then continue to drain for another 20 minutes.

Meanwhile, make the dressing. Mix together the mirin, sesame oil, soy sauce, vinegar, maple syrup, and 1/4 teaspoon salt. Stir in the ginger and garlic and set aside.

Once the eggplant strips are completely cool, gently toss them with the dressing before adding the green onions and sesame seeds. Leave to marinate for at least 10 minutes and then serve.

I love eggplant-this just popped up on my FB feed

A mayo-free pasta salad with grilled vegetables and a vinaigrette so good, you’ll want to eat it from a spoon.

@garland My Mediterranean folks cook eggplant Parmesan with crumbled feta cheese instead and it comes out yummy.
I love eggplants. I usually air baked them and then add fresh tomatoes, spices and feta cheese and eat like salad. Also they go well with just vinegar and herbs.

I use a recipe from Lidia’s cookbook. It is eggplant fans. You cut the eggplant in half, and then cut it into fans - maybe 3 cuts on each half (so slices the don’t go all the way to the end) Place face down on a greased pan. Put slices of mozzarella in between the fan pieces and cover with tomato sauce. Bake in oven until all is cooked and melted. I think of it as easy eggplant parm (no frying involved)

found somebody making it online 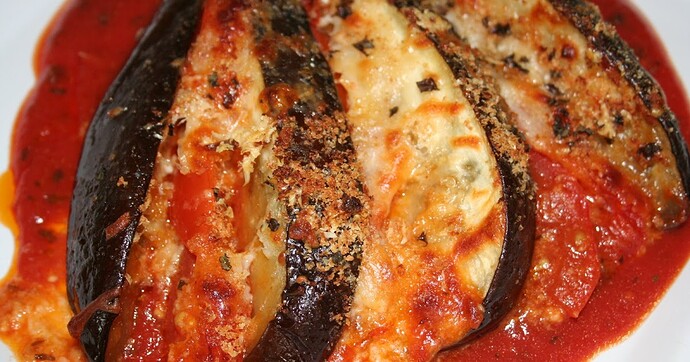 This is a dish I based on a recipe from Lidia Bastianich cookbook Lidia's Italian- American Kitchen. Lidia makes this as a side dish with 2...

For the WaPo readers:

I made this last night - It was delicious.

This silky end-of-summer dish, reminiscent in some ways of shakshuka, is run through with spiced eggplant, tomatoes and herbs. 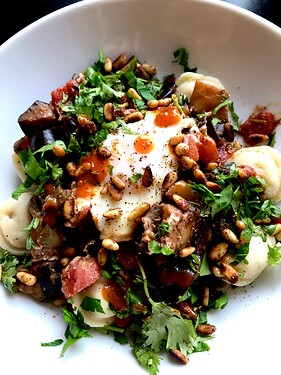 Here is a very popular dish from northern Iran called Mirza Ghasemi. Northern Iranian dishes use lots of garlic. I roast the eggplants in the oven at a high temperature until they are soft and then scoop out the eggplant. This dish has eggs as well like the dish above. I make this with my loads of eggplant and fresh tomatoes from the garden. I also serve with white rice. 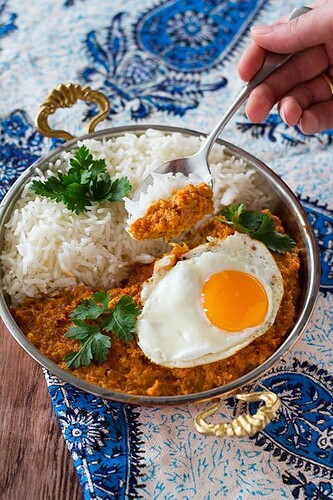 Mirza Ghasemi Persian Eggplants and Tomatoes • Unicorns in the Kitchen

This recipe reminds me a little bit of baba ganoush.

Do you cook it with the eggs mixed in, or with fried eggs on top?

I make it mixed in. I put the eggs in at the last minute though.