Get ready for UF to lose many top professors

So much for that Top 30 ranking. 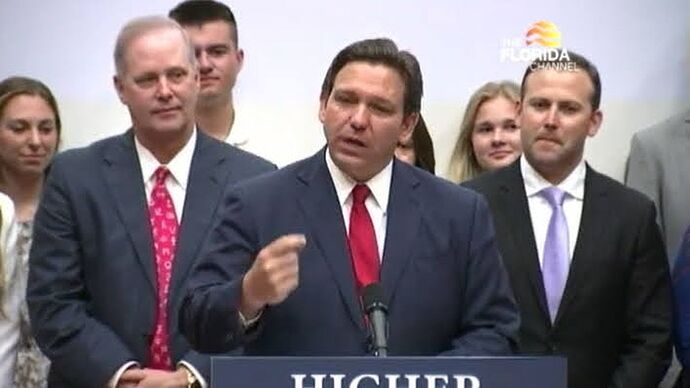 He takes aim at faculty, saying they develop an “intellectual orthodoxy” if left unchecked.

I think UF will do just fine.

Yes, UF will be just fine.

Unfortunately, the bill doesn’t abolish tenure, so I don’t even see the point of it.

I think UF will do just fine.

Ever met a tenured professor? If you ever do, ask them how they feel about their tenure status being degraded. If you don’t think this will have consequences for UF you likely aren’t prepared to participate in this conversation.

Dude is either seriously dangerous or revolutionary, depending on your POV. He’s doing this on everything - remaking society - including schools.

I, for one, am scared but we shall see.

Policies change and professors/universities have brought this on themselves in many instances.

I for one am glad to see it. Florida is a test case and I’m interested to see how things work out. If there’s a mass exodus they’ll have to rethink their strategy. Or like most situations in our society it’s more likely there will be a reorganization along political povs among higher Ed institutions. Institutions that allow and encourage more diverse ideologies may come out ahead and that’s not where we are right now.

Why shouldn’t their jobs be reviewable every 5 years? The idea their jobs are somehow sacrosanct is a big part of the problem. They’re paid by the taxpayers.

Do you feel the same way about the California and New York for example?

Institutions that allow and encourage more diverse ideologies may come out ahead and that’s not where we are right now.

What ideologies is the current tenure arrangement at UF causing to be excluded?

Conservative ones would be my guess. There are very large threads on CC that have addressed this issue time and again under various guises. This one is just the most recent.

Conservative ones would be my guess.

I am not asking for your guess.

You made it very clear that universities and professors brought this on themselves. You implied certain ideologies were excluded.

Either name the ideologies that were specifically excluded by UF’s current tenure system, or admit that you made a reckless and careless remark that wasn’t based in any facts whatsoever.

Given the academic market, I expect tenured and tenure track faculty there feel very lucky to have their jobs and will hang onto them for dear life while objecting loudly. Supply and demand

I’m not getting into a political discussion/debate with you. DeSantis didn’t just dream up the problem. This issue has occurred/continues to occur at many schools…google is your friend if you need concrete examples.

Academia is unique in its lifetime employment guarantee-that is now an issue for publicly funded universities ( and likely some privates as well). As you may have noticed, the job market has changed greatly recently. Apparently the Florida voters do not wish to continue the current arrangement. Such is life.

Academia is unique in its lifetime employment guarantee-that is now an issue for publicly funded universities ( and likely some privates as well).

From the article (which you obviously didn’t read):

Andrew Gothard, president of United Faculty of Florida, said the comments by DeSantis and Sprowls reflected a deep misunderstanding of how higher education works.

Currently, the boards of trustees must approve all faculty who receive tenure, Gothard said, adding it is not a lifetime appointment. Faculty can still be fired with cause.

I said he’s either dangerous or brilliant - i didn’t say which I thought.

I think we’re changing a lot of things in society that don’t need changing or creating a lot of laws for things that never existed.

It is typically those who are anti-government involvement leading the change - so that is odd to me personally.

But i’m not stating an opinion - just an observation that dude is tearing down the existing infrastructure of a lot of things - not opining whether it’s good or bad.

@NR22 , do you have a connection to this issue? Is your mom or dad a professor at UF?

TBH, your tone toward several senior members is very disrespectful.

This type of thing is apparently the type of thing that was the original stated reason for having tenure (protection against being dismissed for political views different from the administration).

Of course, tenure brings with it a collection of other effects (not specifically related to political leanings) which can be good or bad, depending on one’s point of view.

TBH, your tone toward several senior members is very disrespectful.

No one in my family has ever worked for UF or has ever (to my knowledge) been a professor.

In regards to the other senior members…one made claims but refused to provide evidence of those claims. Another made an obvious error. I shined a light on both.

If you are more concerned about tone than substance, then I am sure you will all enjoy your conversations together.