Is UVA better for CS or finance?

I know that UVA is generally regarded as a top school in the U.S., especially among public universities, and I was wondering how good their CS or banking opportunities (internships, networks, careers) were relative to each other.

Basically, when applying to those specific fields, would the UVA name have more pull in CS jobs or finance/ib jobs.

Look at their career outcome report.

More importantly is - what do you want to study? If you’re asking to try nd determine a major, it’s not a good question. Your life should be dictated by what you want, not by where a college may excel.

I would strongly advise against going to a school that has a secondary admission process that culls half the people already in a program at that school. If the school doesn’t want to accept a student into a program, the school should tell that student up front so they can attend a school that has the capacity to see a student all the way through to a degree. It sounds like UVa is basically dangling its top majors to get students to the school, then dumping them into less appealing majors once the students have spent two years of their life and tuition pursuing a major that the school has no intention of letting the student receive a degree in. The student is effectively stuck with either transferring or getting some less attractive degree that they would likely never have attended the school to pursue if they could do it over again.

I think CC would be doing future applicants a big favor by having a separate sub-board that lists schools that engage in these kind of bait-and-switch tactics with their own students.

@CTDad-classof2022 These are not “bait and switch tactics.” UVA is very upfront about their process. The philosophy of not admitting first year students relates to the notion that “students should be broadly educated to deal with the complex issues of the business community and society at large.”

Students often pursue economics or other subjects if not admitted and many/most geaduates do quite well.

But, if direct admission to a business school is crucial to a student, there are certainly lots of very good options out there.

I have no problem with a school cutting out poor performers. Certain majors are not for everyone, and some people do not realize that until they get to school. But when a school is cutting half of the students in a major by the end of sophomore year, that feels more like a bait-and-switch. The school doesn’t want to spend the money on business professors, who are often more expensive, and it wants the tuition, so it shifts students into majors that they didn’t come to that school to pursue.

Does UVa require a separate signoff every time a student or parent sends in their tuition that states “This student has a 50% chance of not getting a degree in their major”? If not, then UVa is not upfront about the process.

I don’t want to pick solely on UVa, because they are not the only school that does this. I do think that this board would be providing a valuable service to its members if it identified the schools that did this for certain majors.

UVA doesn’t have McIntyre admission rate on their website, but they are very clear on the admission process and that it is holistic. Admissions - B.S. in Commerce | UVA

I agree that students who are certain they want to be a finance (or other business) major should avoid colleges which have secondary admission, especially holistic ones. Holistic means the admission decision is not entirely in the applicant’s control, so a student can have a high GPA, be in the ‘right’ clubs, etc., and still not gain admission because the school balances gender, intended major, race, etc. when making admission decisions. Studying economics is not similar to studying finance. At all.

I agree it is not exactly bait and switch, but the majority of applicants don’t really understand how difficult it is to get into the business school, and how many very highly qualified top GPA kids are turned down. I stand by my statement that you really do need a Plan B if you go to UVA for business, and you need to understand there’s a 50-50 chance you won’t get into the business school and be comfortable with that.

Absolutely, you may need a plan B and there is transparency about that. And the percentages , stats are certainly out there. It doesn’t seem at all hidden from the beginning with undergraduate admissions that the process is holistic and not everyone who wants into McIntire will be accepted. It is not a secret that you need to in general complete a two year liberal arts education before moving on to McIntire. It is no doubt that secondary admissions can be a stressful process. There are many great schools that will allow you to avoid that if that is important to you or your child.

The repeated bait and switch angle here is what I have an objection to. It implies fraudulent, deceptive, possibly illegal actions by a major University. It seems to be an over the top , inappropriate characterization of what goes on.
I find it offensive.

Does UVa require a separate signoff every time a student or parent sends in their tuition that states “This student has a 50% chance of not getting a degree in their major”? If not, then UVa is not upfront about the process. 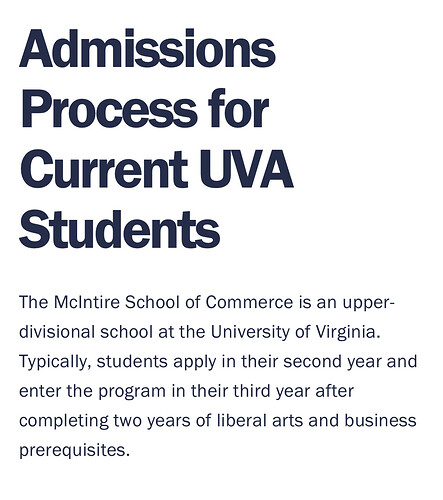 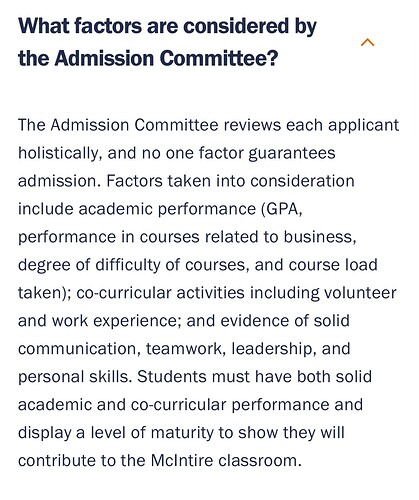 The McIntire School of Commerce is regarded as one of the nation’s finest business schools, offering world-class programs at the undergraduate, graduate, and certificate levels. Students may choose to concentrate in Finance, Accounting, Marketing,...

Or listen during the information sessions or while on the campus tour where in our experience this was discussed.

As someone whose daughter attempted to get into McIntire but didn’t with nearly a 3.7 GPA and extracurricular activities I feel there was no bait and switch. She went in eyes wide open about this possibility and realized there is a randomness to the selection process (it’s not just about grades at all).
She is an Econ major minoring in Entrepreneurship thru McIntire and Sociolgy who has a very selective finance internship in DC this Summer. I know she would have loved to be in McIntire but I feel it’s overblown a little bit in the job prospects vs Econ, Stats, CS and Data Analytics.
Look at the salary and placement in the Economics Department destination report vs McIntire similar companies and salaries for graduates of both. The problem lies in if you want to do accounting…there isn’t another option at UVA unless you are in McIntire.
Also consulting jobs from Econ is really strong and they’ve added a specific course in the Econ department with McIntire that’s really helped.

Quite a few of the top business schools have secondary admission: Berkeley-Haas, UNC-Kenan-Flagler come to mind. The thing is students do well at these schools even if they miss out on the secondary admission, but they should have interest in econ and other majors outside the b-school.

The thing is students do well at these schools even if they miss out on the secondary admission, but they should have interest in econ and other majors outside the b-school.

As another poster pointed out, Econ is not the same as Finance or Accounting or Marketing. A lot of employers simply need certain skills when they hire someone, and an Econ degree from a good school is not the same as someone understanding those business disciplines coming out of college.

My strong advice to any student that wants a career in Finance or Accounting or Marketing is to avoid schools that engage in this secondary application practice if you really want one of the affected majors. There are many good schools that don’t do this.

And you could have stated your position on all of this without defaming a university in the process. Universities have their own philosophies on business education/commerce , and that is their “business.”

@Dark_Duelist UVA should provide you with good opportunities in either case, provided you do well, interview well, etc. I would go with what seems most interesting to you. I believe CS at UVA is usually in engineering, but can also be in Arts and Sciences. UVA has good recruiting and a strong alumni base. Good luck!

You don’t make a true argument. The school is not culling out poor performers. You apply in your second year and the acceptance rate recently has been slightly under 50%. Many schools are similar. Michigan seems to make that decision based on high school grades and not college. You pick which method is better. I like this one as students can spend two years and get a diverse education and see if business is for them.

I like this one as students can spend two years and get a diverse education and see if business is for them.

Students are not deciding, the school is. The student could be doing perfectly fine in their chosen major and find out at the end of their sophomore year that their choices for a degree are A) something in social sciences, which was not their choice and is meaningfully more difficult to get employment in, or B) transfer, most likely to a school that is reputationally a significant step down from UVa and most likely the schools they were accepted to out of high school when they chose UVa.

Michigan seems to make that decision based on high school grades and not college.

I am not familiar with Michigan’s program, but are you saying that a kid can be accepted to Michigan, be doing great in the prerequisites at the University of Michigan, and still not make it into the major of their choice in their sophomore year because of their high school grades?

Average GPA and GPA range are included on the chart. External transfer admission rates have been 15-19% in recent years.

To answer your question: UVA is better for finance than CS. It is tied with VT for 31 for CS. Their undergrad business program is much higher ranked and better regarded. https://www.reddit.com/r/ApplyingToCollege/comments/n3tp2i/us_news_2021_ranking_of_best_undergraduate/?utm_source=share&utm_medium=ios_app&utm_name=iossmf

Schools like UVA-McIntire, Berkeley-Haas believe a strong liberal arts core foundation is needed to succeed in business. That is the reason they have a 2-year undergraduate business program with less time to focus on specific areas of business. Lots of times students are recruited early in the program before they have taken many courses in finance or analytics or other areas.

Maybe a four year business school is more suited to those interested in accounting or finance. There is more room to fit in courses here.