Their costumes this year will likely be occupation-based: doctor, firefighter, astronaut or something similar.

But the new baby is going out dressed as joey in his momma kangaroo’s pouch. Mom will be in a kangaroo costume with Little Boy in a brown onesie with a
brown cap w/ears, securely wrapped in a front carry baby sling.

Any rash? One of the twins got sick with a high fever (103-104) w/ runny nose. She tested negative for flu and Covid. She’d been vaxxed and had already had Covid back in January. Pediatrician shrugged and said it was a viral infection of some sort, sent her home with recommendation for rest & fever reducers. About 5 days into the fever, she developed a pale pink, raised rash in her upper chest, but just a really small patch. DX- roseola.

We have no idea where she caught it because they weren’t socializing with other children. Also her twin never came down with it.

interesting! Hmmmmm, we never saw a rash, and DD thinks it might have actually been RSV after all. 7-month-old gd still has a cough, and DD has an sinus infection. They are so ready to be over this. I just feel lucky to have been spared!

GD was Minnie Mouse last year and might want to do the same this year. That would be the easiest. With a new baby in the family, I doubt that D will be up to anything challenging as she recuperates from her C-section.

How is your GS’s puppy costume made? GD’s current favorite is the Disney Puppy Pals. She may want to dress up as Bingo or Rolly or their neighbor Keia instead of Minnie.

I am at S’s house for the first time in over a year and first time to see his girls since New Year’s Day. Life was too crazy with my downsizing move this summer to make it to FL. I was exhausted last night and hoping to sleep a little later this morning given I had been babysitting for D on Monday and Tuesday while they had back to back concerts that represented a Father’s Day gift and D’s birthday gift (I spent the night at their house knowing they would be late). Long day of travel and shift from CT to ET. Anyway, I stirred a little after 6:30 am here and rolled over only to find oldest GD, who will be 5 in two weeks time, standing by my bed and staring at me in her glow in the dark skeleton pjs. I screamed and she just laughed. I was kind of shocked I didn’t wake S up (DIL is traveling for a conference). GD wanted to get in bed with me and I said fine, let’s go back to sleep. Of course, no sleep for either of us. She pulled a few books off a shelf nearby the bed and leafed through them and also tickled me with both her hands and feet from time to time. It was both precious and a little annoying. Still, I love retirement and the opportunity to visit more often now

Sorry, not meant as a reply to you.

It was the easiest costume we tried on. Just 2 Velcro closures. Also, soft fabric. I suspect she will wear this for many years to come.

GD has been elmo and GS a duck in the past. Not sure this year. Also DK if the 7 mo old will partake. They live in a condo.

Yesterday D1 had their regular weekly groceries delivered. The nanny usually unpacked the groceries. She left the kitchen for few minutes and when she returned she noticed a lot of packages were empty and was about to tell the dad. Then she noticed GD putting away garlic (in the right drawer) and some fruits in the refrigerator.
She is growing up fast. She is definitely a toddler now.

@oldfort - that’s pretty impressive on the part of your GD!

Our 19 mo old GS brushes his teeth with the electric toothbrush… because he wants to eat the toothpaste. Thats about it for his skills

Oh wait- he and 5 yo sister have discovered how to climb up and escape out the window of their new house. Little escape artists. Swell. 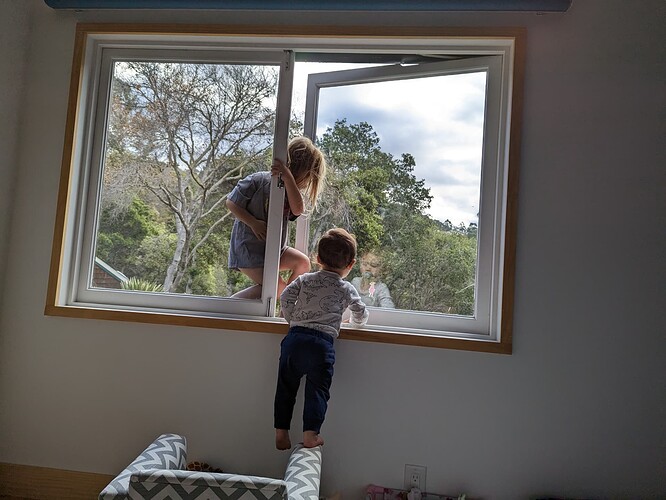 21 month old GD is really good at feeding her food to the dog with a fork.

6 month old has a little monster costume. I think it will be worn but not likely for long. No trick or treating but they will take him to the pumpkin patch.
He is having trouble sleeping. For the last week/10 days he wakes up every few hours screaming. They have resorted to breast feeding and letting him stay in their bed.

I know that some kids who were sleeping well have sleep regression from time to time. But I just want to throw out there … my S suddenly started waking up every couple hours screaming & it was because of pressure in his ears. Lying flat really bothered him. He ended up with tubes. Just sharing my experience, not saying that’s the case for your GS.

This is what happens when you have an older sibling. You learn how to get in trouble.

I thought that it might be his ears. She has a message in to his Dr. My daughter doesn’t think it’s ears since he hasn’t had a cold or any congestion.

GD 8-months was just recently doing this, but tooth cut through, and she is no longer wakes up crying.
On another note, the daycare transmission of illnesses for my Covid-baby grandson (who just turned 3) continues. I was driving him home from school and he said -urgently- that he needed to poop, and then he proceeded to vomit up all his breakfast, snack and lunch over himself and his car seat and the waterproof seat cover I had thankfully installed in my car. Poor little bugger and poor me because it was a real pain to take out the car seat, take off and wash the cover, and it will be an even worse pain to reinstall the cover tomorrow and wrestle it back in the car! He just recently recovered from a virus with very high fever, and has enjoyed the last few days of school. Guess he’ll be at home for a few more…

My daughter doesn’t think it’s ears since he hasn’t had a cold or any congestion.

You don’t have to have a cold or congestion to have middle ear fluid which is what causes the discomfort. Or a clogged Eustachian tube.

Another thing could be a build up of ear wax. Pediatrician couldn’t seem to clear up DD2’s one ear - she would see gray. Unfortunately when she was scraping stuff out, she accidentally punctured DD’s ear drum. However that ear drum healed perfectly. We needed to just take care on having her ears flushed - I don’t remember exactly, but it was easy to do. DD2 never did need tubes.

I personally build up with ear wax, while I have a friend who absolutely does not have ear wax (so she has to be careful on that too).

The teething definitely can be it too.

Have been having fun adventures with GKs since my babysitting duties increased lately. Monday H and GD both had no school, so we took the kids to the zoo and had a fabulous time, except of course lots of schools were closed so it was really crowded! Almost an hour wait for train ride which is mandatory apparently–kids were great throughout. Lots of other grandparents apparently also stepping up, we ran into friends we hadn’t seen since pre-covid with theirs.

Tuesday I took GS to a toddler playgroup/story hour at the park. D is trying to find more enrichment activities for him, and that was a lot of fun.

Getting better at logistics though I still have the parents take him up and down the impossible staircase.

One of the fun things is that, at about 17 months, he’s walking now, after a lot of PT and determination on his part. I think he’s really happy to be able to get around like the other kids!