Thoughts on Elon Musk buying a stake in Twitter?

Are there good times and bad times for sexism?

How about we don’t rush to judgement and let the legal process work.

Seems like this sorta behavior follows him around company to company. 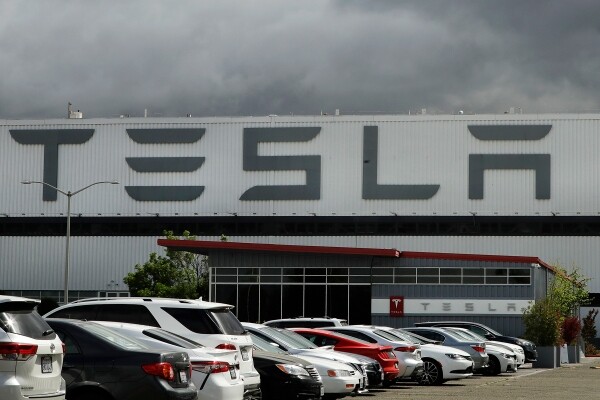 Seems like this sorta behavior follows him around company to company.

As does business success. Correlated? Maybe?

As does business success. Correlated? Maybe?

So, Musk’s short run business success correlates with sexism and sexual harassment of women in the workplace? And that’s a good thing? As long as the business succeeds, it’s OK to treat women poorly?

Aw sushi that’s not what I said. If there are legal issues that need to be resolved let that work out in courts without a rush to judgement.

But when it comes to a business culture, a ceo if free to set that path if they choose.

If employees don’t like that culture they can and should move.

If there are legal issues that need to be resolved let that work out in courts without a rush to judgement.

Here’s the problem with that sentiment. Courts aren’t always friendly to the plaintiff. 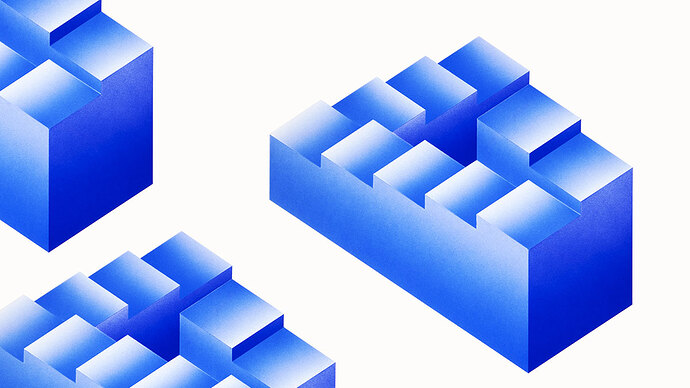 How HR and Judges Made It Almost Impossible for Victims of Sexual Harassment...

Many companies have policies and procedures for handling sexual harassment and discrimination claims. But are they actually effective in reducing incidents? Probably not, and the reason goes back to the way HR and the courts designed these policies...

Sexism and sexual harassment in the workplace shouldn’t need the courts or a layoff to “fix culture issues.”

We can disagree on those two points. And that’s ok.

We need laws and courts. I don’t know of many who’d argue against that.

When it comes to business culture that’s the call of each business. Many approaches can be taken.

It’s really a shame that calls for “being more inclusive” is seen as being POLITICAL.

The employee letter is a disjointed ramble that reads as though a child wrote it. It doesn’t seem like a call to be more inclusive to me.

Kinda like Colin Kaepernick not only being shamed, but was not ever able to find work again. The NFL nipped that one in the bud too.

Perfect example. Kaepernick made the workplace toxic by injecting politics. No one wanted to coach him or play with him. Teams can look past some level of toxicity if a player can help them win, but the bottom line is…he stunk.

Perfect example. Kaepernick made the workplace toxic by injecting politics. No one wanted to coach him or play with him. Teams can look past some level of toxicity if a player can help them win, but the bottom line is…he stunk.

My read was that you are applauding the five TB Rays players, because they didn’t want to celebrate gay pride because of their religious beliefs. Kaepernick was essentially kicked out the NFL and eventually received some kind of settlement.

Kapernick stinks? He’s better than 50% +/- of the quarterbacks in the NFL, at least as of a few years ago. There are some really bad QB’s in the NFL, like a Sam Darnold, who the Panthers are trying to get rid of.

Kapernick was “run of town,” not because he lacked talent, but because the almost entirely white ownership and some fan bases in the NFL didn’t want him due to his protest(s). The TB Rays players have guaranteed contracts and will continue to play baseball.

TB Rays: The organization brought politics into the workplace with the pride flag patch on the uniforms. Toxic. Five players chose not to participate. I absolutely applaud that.

The direction of the public shaming depends on the optics of the situation, and the media bias of whatever reporting organization is reporting.

Many analysts have written about how Kap simply wasn’t good enough, how defenses figured out his style of play after he burst onto the scene, and he was rendered ineffective. Although few fans had any interest in paying to see his politics, Kap just uses that as an excuse for his inability to win.

Kap just uses that as an excuse for his inability to win.

He almost won a Super Bowl against the Ravens. And the 49ers, just like in the case of Jimmy G, wanted to upgrade. And just like defenses, QB’s can adjust as well.

It wasn’t his talent that kept him out of the NFL. And Kyler Murray, Deshaun Watson and Lamar Jackson are the same type of QBs as Kap is/was, he could easily play in the NFL, though now he may have been out of the game too long.

What’s political about gay pride? I’ll leave that one alone. Sports also celebrates Black History month too, is that political? Baseball will be celebrating Juneteenth (6/19) TODAY.

Did you see the shirt Steve Kerr of the Warriors wore and his fairly recent press conference on topic of guns? He’s always been outspoken about his politics and yet, he’s a still beloved coach here in the SF Bay Area. His employer, the GS Warriors, leaves him alone. Just like Pop too.

Kapernick was “run of town,” not because he lacked talent, but because the almost entirely white ownership and some fan bases in the NFL didn’t want him due to his protest(s). 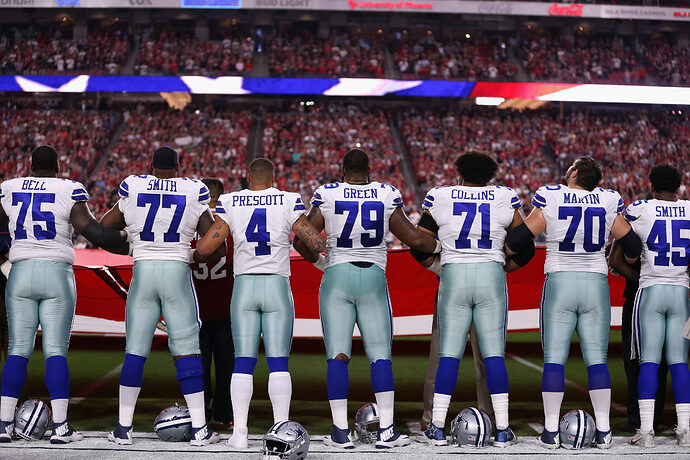 Demographic Data Shows Which Major Sports Fan Bases Are Most Likely to...

The question of whether or not members of the Dallas Cowboys will kneel during the national anthem in protest of racial inequality is turning into one of the biggest storylines of the NFL season’s opening weekend, but Morning Consult Brand...

From the above, it is not surprising that similar type of political activism is much more common from NBA people than it is from MLB and NHL people.

I’ll stick with some since 69% of the NFL fans Democrats or Independent. And if I googled properly, the average viewership for a live broadcast of an NFL game is 17 Million viewers. And the survey is of 169,000 NFL fans.

We know sampling can be wrong.

I could write a dissertation on this, but back to the topic…

Elon suggested to a few of his employees to “shut up and work.” Not much different from the NBA commissioner telling players to shut up and play in the season following the bubble. “Shut up and sing”, “shut up and act”, etc.

Kerr and his stance on guns are less political, but also off topic.

I would very much like to engage in this conversation but had been instructed (at the risk of further suspension) that debate and controversial topics such as race and politics are prohibited.

Given the “free speech” nature of the thread any guidance would be appreciated. Thanks.

Given the “free speech” nature of the thread any guidance would be appreciated. Thanks.

“Free speech” is not without consequences. In life and on this site. While we cut some slack in the cafe, ToS still applies.

To that end, I am assuming we are done discussing Colin Kaepernick. If my assumption is not correct, please move the conversation forward anyway

Thanks for the consistent message and application of the rules and penalties. Much easier not to run afoul.

To that end, I am assuming we are done discussing Colin Kaepernick.

It’s looking like Elon is going to have to swallow the horse pill if he wants to buy Twitter.

Tesla CEO Elon Musk said he wants more clarity on the number of spam and fake accounts currently on Twitter.