Two High School Girls Fighting While Others Watch and Record It

I witnessed this yesterday and found it so upsetting that I just have to vent. I was driving and pulled over next to them. My car horn didn’t phase anyone, so I rolled down my window and started screaming for them to stop and that “You are better than this”. They stopped a few seconds later, after one pulled off the other girl’s shirt and bra. Maybe that was the point of the fight, to have a video to post of the humiliation. It is just so sad that teens can’t seem to support each other. This was broad daylight, at a park, and at least a dozen high school girls were watching.

Just as disturbing as one girl getting unclothed is that 12 - 12!!! - were watching! Haven’t they seen enough videos by now to know that things can go wrong fast?!

Of course, they all had phones that could have been used to seek help…

Don’t flame me. The world has become a joke.

I won’t flame you because you do make some valid points. But, I’m not willing to throw in the towel and take the view the “world has become a joke”. @toledo , I applaud you for pulling over and trying to appeal to these youngsters to do better.

Definite kudos. Need more applause to people who stand up!

Don’t flame me. The world has become a joke.

The World has been a joke for all of human history. It is actually becoming better.

Good job, toledo. It helps society if elders (non-kids) step in sometimes and say “you are better than this.” That was a really helpful statement - trying to get them to think more of themselves.

There were fights like this daily when I was growing up (there was an actual location by the middle/high school), boys and girls, in my middle class safe town. Just no recordings, thank goodness. It definitely happens less often, but gets more notice due to videos.

You all had this is middle school and high school. Every school from 1st to 12th grade had playground or lunchroom fights, with kids all standing around and watching. So please stop all of this “kids these days” nonsense.

Not only were these fights even more common when you were kids and when your parents were kids, they figure heavily in literature and in other popular media.

How many TV shows of the 1960s, 1970s, and 1980s had the scene where the hero confronts the class bully in a fight on the playground? The basic premise was that these fights, and the physical bullying that led to them, were observed undisturbed by the rest of the class.

What is with people and their selective memories?

This short is from 1960s, so not even during the teen years of most of the people here. It is fiction of course, but it points to the fact that physical fights between kids with the rest doing nothing or even cheering is nothing new. 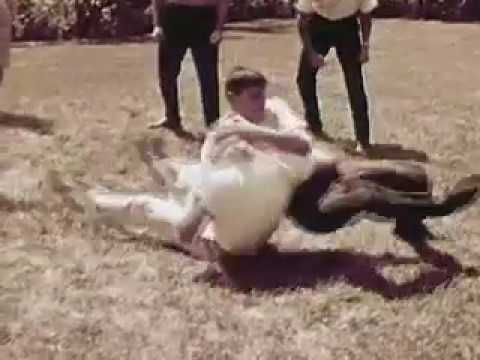 Not in our schools growing up. Yes there was bullying but you’d be expelled for physical violence and everyone knew it.

Sound like your schools were unusual. These fights usually took place outside of school, although my daughter was pushed into lockers for a couple of years. The school tried to stop it (they knew about it before I did), but once they got involved the bullying outside of school just got worse. My daughter made me promise not to tell the school anything, or rise she wouldn’t keep me in the loop (all brought about by my freshman daughter dating a junior who’s ex girlfriend was a mean girl senior). ETA my kids went to the same schools that my husband and I attended, my dad grew up in this town, fights are definitely fewer today.

There may be fewer fights but the psychological damage inflicted by the wide circulation of the bullying/humiliation videos is far worse. In that sense I feel things have gotten worse. Of course, it varies from place to place and yes there are schools where fights of any kind are pretty rare.

The fact that fights amongst young people have existed for centuries, @MWolf, does not take away from the positive contribution toledo made to the situation!

I guess I’m thankful that I witnessed very few fights growing up. Maybe that is why this bothered me so much. So most of you wouldn’t have tried to intervene?

Oh come on, there were fights in the public high school bathrooms and gym dressing rooms frequently in the ‘60s and 70s. My husband told me that when he was in high school the boys especially liked it when girls would fight because there was always a chance that one of them would rip the other’s top off.
I’ll hasten to add these were not “inner city” schools either. They were suburban high schools in the ::cough, cough:: genteel south.

As for the parochial schools, there were plenty of fights there as well. It’s unfortunate but teenagers often are impulsive and hot headed. This has always been the case.

Read what I wrote, please. I was responding to the “Kids These Days” posts.

Any discussion of fights between kids based on the premise of “we didn’t do this when we were kids” is useless, since basing any solution on false memories of a past that didn’t exist will not result in solutions that work.

Adults did not step in, because “boys will be boys”, and bullying was considered to be acceptable behavior. In fact, bullies were generally the kids at the top of the social ladder, who were treated as such by the administration, while the kids who were bullied were far down in the pecking order, including in the eyes of the administration.

I don’t know whether your school didn’t have this or maybe you weren’t a target, so you had the luxury of not noticing it happening.

In the 1970s and 1980s ,Teenagers as young as 14 were being used in blatantly sexualizing ads. Brook Shields was only 15 when she was put in the Calvin Klein ad, and that was in the 1980s.

Those are all in “family friendly” shows.

I have done the same thing. I witnessed a fight while coaching peewee soccer practice at the park. It was a couple of middle schoolers. I had a whistle (more annoying than yelling, gets the attention faster) and a bunch of 5 year olds yelling “stop it, you’re hurting him”. Worked like a charm. No one around filming but this was more than ten years ago.

Physical fights were rare when I was growing up. It was not tolerated in schools and society in general. The biggest fight I witnessed was one I participated in; with my sister. We were annoying each other so much that it escalated to violence. We were both so shocked by our actions that it never happened again. I hate violence.

This is very true! Give me the after school fights on the hill, so much less traumatic!