Hi everyone! I’m sorry to bother you all, but I was hoping for a bit of advice.

I recently got into UC Berkley and the Accelerated Research Program at UNC Chapel Hill. After considering financial aid, the cost of attendance is roughly the same. I live in Maryland, so North Carolina is roughly 6 hours away. I’m majoring in Environmental Science and Chemistry.

I’m torn between the two, and I would really appreciate any insight! Thank you!

Berkeley and Chapel Hill are very different towns. Have you been able to visit? Berkeley is urban and very liberal. Berkeley is liberal by California standards. Chapel Hill is very much a college town. It is liberal by North Carolina standards, but that’s not saying much (I live nearby and love NC, so I say this with love). UNC-CH also has much more of a frat boy white kid culture (though it’s a big school so that’s not everyone of course).

We found CH to be pretty liberal, but it’s likely not as liberal as Berkeley.

My daughter would have been miserable if there was a “frat boy” culture. She did not find it to be that way at all, but I assume it’s there.

We found CH to be pretty liberal, but it’s likely not as liberal as Berkeley.

As @threegirlpileup noted, there’s liberal by NC standards and then there’s Berkeley which is liberal against any standard in the history of the known universe. (Though even Berkeley can be very hypocritically NIMBY.) That will appeal to some and not to others. But they are far apart on the spectrum.

Yes, I have no doubt that Berkeley is very different than UNC. My point was that a liberal student should be fine in CH, and especially down the street in Carrboro. We are pretty liberal and my D was very comfortable. While I have not been to Berkeley, I agree it’s on a different level.

It’s hard to advise this student without any information. I will say that the research opportunities at UNC are outstanding.

Hi! Thank you for your response! I would say I’m pretty liberal, and they dont provide too much financial aid but it was enough for my family.

I am most concerned with academic reputation and research opportunities. As well as getting into a reputable PhD prpgram after graduation.

Both choices will be fine for that. Go where you are happiest

Both schools have strong academic reputations. UNC has plenty of research- can’t speak for Berkeley. I agree - go to the school you like better.

Something to keep in mind. Berkeley is in a very expensive city, and does not offer housing all 4 years. You will be paying very high prices for rent, and the cost of things like eating out, concerts, clubs, will shock you. Even highly compensated young professionals find the Bay Area to be pricey and must be budget minded. UNC is in a relatively low cost of living area with abundant housing and Raleigh nearby if one wishes urban adventures.

I was going to say the same thing. We just signed a lease for my D who is doing an internship near Berkeley this summer and the rents are crazy! Just another factor to consider.

Not normally, but some hard to get merit scholarships like Regents are possible.

UNC-CH also has much more of a frat boy white kid culture (though it’s a big school so that’s not everyone of course).

Numerically, UNC undergraduates are majority White, while UCB undergraduates are about a quarter White, probably mostly related to the state populations. Fraternity participation is around 20% of men at UNC, but apparently much lower at UCB.

I am a UNC alum and I live in Chapel Hill still. I don’t find it overwhelmingly “white boy frat culture”. I think you see more of that down the road at Duke, actually. UNC is somewhat diverse racially and ethnically and very diverse economically. You hear all sorts of languages spoken on campus and in town. Most people at UNC are not involved in Greek life. They weren’t decades ago when I went there and they aren’t now. It’s a very small part of UNC. I think UNC is a good school. It’s definitely had some growing pains of late, but there are some fine opportunities there and it’s a well recognized institution. You can get into any grad school from UNC.

Berkeley is much more urban. Fantastic school. California is very different from the east coast. I lived in LA eons ago, but not the Bay Area although I have visited. I think they are so different in feel it would be worth it to visit. Drive down to CH and see how you feel about UNC. That’s pretty easy from MD.

Congrats on having two good choices!

You mentioned that your concerns were around academic reputation, re⁠search opportunities, and post-grad work. I’ll touch on those, but have one more thing to think about (where you want to build your network) I’ll mention at the end.

On academic reputation, both are obviously solid. You’ve probably done this, but I’d take a look at the specific curricula at each school, and see if there are professors at one or the other that seem especially in line with what you want to focus on. Reach out to them and see if you can make a connection. That could help both in terms of feeling out the school from afar, and establishing a possible avenue for working in a lab or on a funded project. You maybe already have that covered with the ARP option at UNC, but it could still be a useful datapoint. I’m not sure if at Berkeley you’d be in Biochem (L&S) or Molecular and Environmental Biology (Rausser/CNR), but one thing to know about Rausser is the SPUR program, for funded re⁠search for undergrads.

I can’t speak to the UNC post-grad options, but Berkeley has a useful First Destination Survey. It looks like, from the last three years, 22% of the Biochem majors and 18% of the MEB majors went on to grad schools. You can play around with the dropdowns on that site to explore the different datasets they have available. As a preview, here’s Biochem for the last three years: 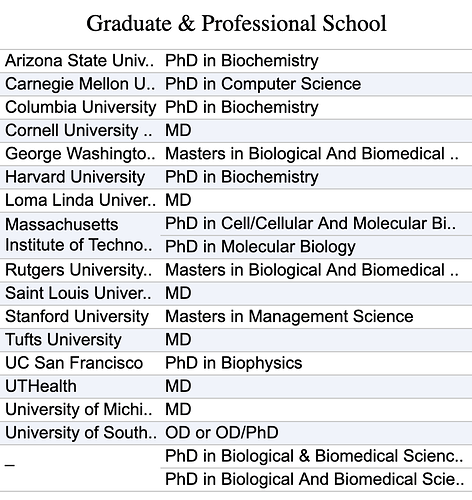 And here’s Molecular and Environmental Biology: 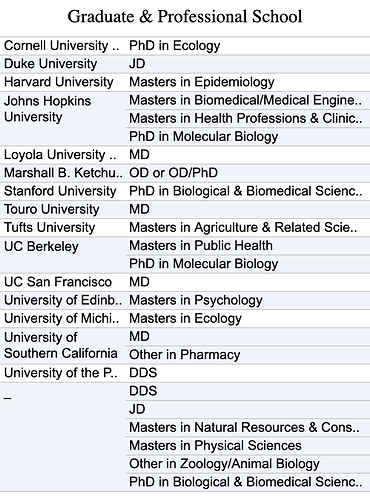 One thing you might want to think about is where you might want to live after college. Obviously, very hard to know that now, and this might be a moot question because of grad school. But a lot of people, especially at state schools, end up building out personal and professional networks in those states. Maybe with family in MD, you’ll want to stay close-ish. Maybe because of job prospects, you’ll want to be on one coast or the other. This shouldn’t be a deciding factor for you, as there are so many variables, but it was advice that was passed to my daughter when she was thinking about where to apply, and it helped her as she was looking at her options.

Also, obviously, if you’re able to visit before committing, that might help you get a sense of the vibe at each place!

Enrollment by Ethnicity and Grade - State (CA Dept of Education)

Serves the state of California by innovating and collaborating with educators, schools, parents, and community partners

I am most concerned with academic reputation and research opportunities. As well as getting into a reputable PhD prpgram after graduation.

No reason to worry there- bother will get you there. You will have to hustle at both, because there are lots of high achiever ambitious students at both, but it might be slightly easier at UNC-CH to get into some classes.

The atmosphere of each is so different, OP needs to visit