Hey guys, so I’m really interested investment banking, hopefully in NYC, and eventually getting an MBA and transitioning over to PE/VC(pretty straightforward route) but I was wondering if any of you could give me some guidance as to the undergraduate university I should attend with regard to cost.

So I was accepted as an assured admit to UNC Kenan Flagler (KF). At UNC I’d have to pay ~23k/year. At Duke I’d have to pay ~54k per year. Is the extra 31k/year worth it for the (potentially) higher earning potential that comes with a Duke degree or should I attend KF? My parents do have enough saved for 4 years at UNC but we would have to take out loans if I went to Duke. I’m pretty passionate about finance so I know that’s what I will be doing regardless of the college I attend.

Duke isn’t worth that debt. You can get into IB from UNC. Start networking freshman year and connect with UNC alums in IB for guidance.

Most people that reply here are going to say Duke, and then dazzle you with stats on recruiting at Duke. They will also tell you how you will earn back the loan $$ in no time given the high pay in NYC IB.

I am with @itsgettingreal21: it’s not worth the debt. Yes, if you work IB in NYC you will make a ton of money. Of course, the cost of living in NYC is also sky high, and you have to kit yourself out with nice suits, etc, and if you have any off time, anything you do is $$$ (of course, a 1st year at GS did a power presentation about the 75 hour work weeks this spring, so that might not be an issue).

But you can get into IB w/o debt- and your choices won’t be limited by having to service debt.

Take the win of getting in- then save your money!

Kind of wondering if this is a trick question.

The short answer is no, the extra cost for Duke is not worth the extra money. UNC is an excellent school, and Kenan Flagler is the #9 school for Finance undergrad, according to US News (I don’t pay a lot of credence to rankings FWIW). No school is worth an extra $120K for undergrad, especially when you have as fine a choice as UNC. How about financing your entire MBA with an extra $120K?

My best friend from high school went to Duke. I asked him if he would send his kids there, and he said no way. Not worth the extra cost. His daughter next year is attending…the University of Arkansas. And he is right. Duke…great school. Also Duke…not worth the money for $120K more.

FWIW My nephew graduated Duke a couple of years ago and was unable to get a job offer. Went back to Duke for a specialty masters degree in business and was again unsuccessful at getting any job offer. He is a D-1 athlete with an impressive presence & was All ACC academic athlete honoree. My thought is that Duke’s undergraduate school is a bit over-rated while UNC is under-rated.

FWIW This has not been my only dealing with Duke. The law school is great & the prestige is nice, but the results for undergraduate employment are not in line with its US News ranking.

Typically Duke would not put someone in the Masters program without work experience - if through Fuqua.

There are Harvard kids that can’t get jobs.

Everyone thinks - oh, if you go to this school - you are set. That’s far from the truth. It takes initiative, determination, and a lot of luck - not to mention strategy.

And then once you get it - now you’re on your own and have to perform.

You are incorrect with respect to required work experience for the Duke masters programs that I referenced; in fact, applicants are not permitted to have more than 2 years work experience. 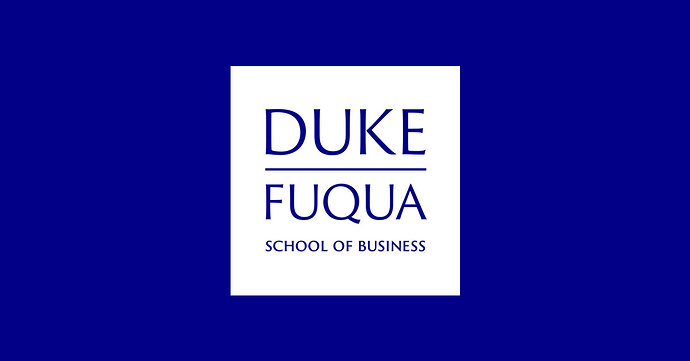 This program is designed to compensate for the lack of an undergraduate business major at Duke while also capitalizing on Duke’s name & prestige to foreign educated students (i.e. a cash cow for Duke Fuqua).

Typically Duke would not put someone in the Masters program without work experience - if through Fuqua.

The MBA program would require work experience but there are a lot of non-MBA masters programs at Duke.

It kind of doesn’t matter.

We had one kid straight through - a Stanford undergrad they knew they couldn’t get otherwise. That was it.

At my automotive OEM, we hired some MBAs who went straight through - schools like MTSU, Miss State…they started in the same jobs as undergrad and I forget if there was a salary differential, but if there was, it was $3K or so…that stands out.

In my view, if one applies to a top MBA program without a few years of work experience, the applicant’s chances SHOULD be close to zero, but I do not think that that reflects the current situation in the world of MBA applications.
Regardless, full-time post undergraduate work experience is not a requirement at top MBA programs even though both you & I think that it should be.

MBA applications to full-time 2 year programs dropped dramatically during recent application cycles. (P&Q ran articles with titles such as “MBA Apps Take Shocking Plunge” in 2018 & in 2019. And several ranked full-time MBA programs have closed down due to lack of applications & lack of matriculants.)

In the not-too-distant past, the youngest average age among the top MBA programs was found at Harvard Business School & Stanford GSB.

I’ve posted my daughter’s experience on similar posts. She graduated from KF in 2017 (was not a direct-admit). She received an internship offer in IB the summer before her senior year at a top bank. That job turned into a full time offer, which she accepted. She had her choice of satellite offices in several major cities from which to work (including NYC), and chose to stay in her hometown of Charlotte. Many of her KF classmates settled into finance jobs in NYC - only one or two remain there today. Most have transferred to other cities, citing the high cost of existing in NYC despite 6-figure salaries.

MANY major corporations actively recruit from KF. My daughter’s classmates ended up at companies like P&G, Google, BofA, Deloitte, KPMG, E&Y and others. The internship opportunities were plentiful, the interviews were all set up through K&F.

I should also mention that my D was not on an finance/IB path at all - and actually had been on mostly marketing-focused internship interviews before randomly landing the IB interview with the bank. She fell in love with the challenging environment and the camaraderie of the IB group and chose to switch gears to IB. Also regarding the MBA - none of the 20 or 30-somethings that my daughter works with have an MBA. While it may still be necessary in some industries, I would recommend working first and researching whether there is a positive ROI for an MBA in IB.

Obviously, I agree that you should save your money and go to KF.

Also regarding the MBA - none of the 20 or 30-somethings that my daughter works with have an MBA.

IB analysts who get an MBA are usually looking to jump to other industries (like PE). There are still folks looking to enter IB at the associate level after an MBA these days but fewer entering these days.