My daughter just got an email for her interview. She didn’t request. Her interviewer is a teacher at her own school! How weird is that

I would not send a random alum letter … it may hurt more than help.

Does anyone know if Cornell sends likely letters to students who aren’t recruited athletes? And if they do, do you know around when?? Im guessing all of you reading this are as nervous and anxious as me!!!

Good question. It is nerve wrecking. The only communication I received was from the Financial Aid office asking for missing documents. That’s it! No interview, nothing.

I don’t think Cornell offers interviews. But, I think asking for missing FA documents is a very good sign.

I think asking for missing FA documents is a very good sign.

Sorry, it’s not a sign.
The financial aid and admissions offices operate independently and in parallel, for maximum efficiency.

They sent them on march 15 last year!

As far as I know, Cornell sends out likely letters to non-recruited athletes as well. I believe the letters come specifically from the school you applied to as well

Yes its weird and in some sense considered a conflict of interest. Most schools ask interviewers to disclose any conflicts including being affiliated with the school of an applicant even though they may not know them personally.

There are no longer reports submitted, just a simple yes/no if there was a meeting.

Back when we were sending in actual reports, there was a section to complete if we knew the student prior to the meeting.

Aren’t the Cornell interviews only informational? They aren’t evaluative, so there can’t be a conflict of interest. It seems asking a teacher at the student’s school about Cornell is a great way to get information on the school.

Just received the invite for the interview.

That’s good to hear they are still scheduling interviews. Hopefully my D will hear soon too. Nothing since receiving the email about a month ago telling her to login and sign up for a conversation opportunity if she wanted one.

Just to be clear, Cornell interviews (other than for Fine Arts or Urban and Regional Studies) are informative, not evaluative. That means they have no bearing on the admission decision. 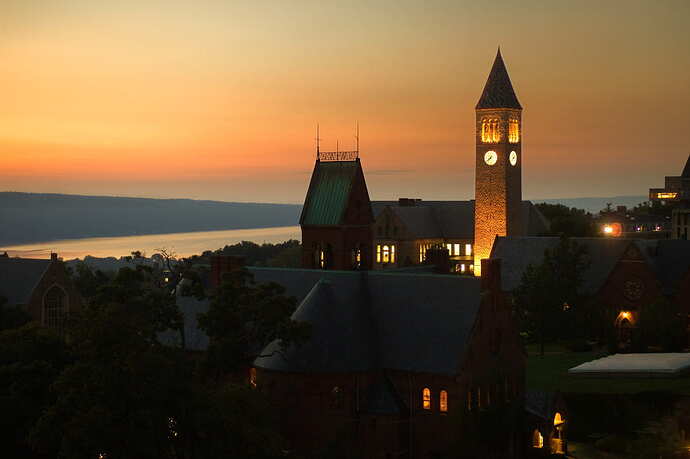 My son was contacted yesterday via his cell phone for an alumni info chat (I have twins and a niece all going through this admissions cycle… so I am tracking what feels like a million threads on CC) My son says he really doesn’t remember asking for a chat session anywhere on the portal. I told him there’s no other way he’d get offered one. It was interesting that it was a call through his cell phone and not an email but whatever. The alum described it as an informal info-sharing meeting which at this point is all my kid can probably handle. The college admission process burn-out is real…

my daughter was contacted in November, a few weeks after applying. She was considering requesting an interview but had not yet done so when someone in our area contacted her directly via email for an “alumni meeting”

totally! Why does it have to cause burn out? It’s ridiculous.

I read an interesting blog quite a while ago (I don’t recall the name of the blog or the author) but he mentions that as parents many, many of us have been talking about or referencing college with our kids since our kids were very young in grade school and middle school. Not big heavy conversations. Just those throw-away conversations like “keep working hard so you can get into a good college!” or teachers of younger kids mention college or have banners and/or pennants of various colleges up in their classroom. Then they get to high school and the conversations are more directed regarding their grades and work ethic both pros and cons. So this emphasis on a “good” college has been many years in the making. It was theoretical until this fall when it became a reality. Now the kids are finally at the point to do something about colleges. It’s been building up to this point that for many they’re just done with thinking about it.

My son received the text today for Alumni interview as well

My son requested an alumni interview (he requested at all that allowed I think).The interviewer started out by telling him that there was no way for him to create a report and there was just a box to check that it was completed. My son ended up chatting to the interviewer about all of the non-academic activities the interviewer did on campus. It was a low-key interview experience and my son came away feeling more positive towards Cornell. I guess that is the main point.