When I look at the marketing I see the main reason is they offer different types of noodles now
and slightly different flavor profiles–so the color changes reflect that. Bigger and bolder. Easy to tell what you’re grabbing off the shelf. The shortened name just highlights the brand name–they’re claiming Mac N Cheese as their own.

I think that’s pretty smart actually. Maybe they ARE earning their pay.

Didn’t know they made pizza!
When the 'rents went out my sister would be left with a big can of spaghetti to heat up on the stove–that was pretty much the extent of the cooking lessons at our house. We’d have the house to ourselves and watch TV all night. I still remember the TV line-up–started with “Nanny and the Professor”…

I think Kraft Mac and Cheese fits a niche too. Often kid friendly. Quick. Can take add-ins. (stir in some steamed broccoli - yum). Probably the first meal “cooked” by lots of tweens. And as mentioned, budget friendly. It may not be nutrient full, but you can spend a lot more $$ on nutrient empty food!

I’m sure you can guess my opinion and usage of the product.

I don’t think I ever bought this product when my kids were younger, if I make Mac and Cheese, it’s going to be from scratch, I do that with most things.
But I’m guilty buying the popcorn from Costco, then I read something not good about it, so ever since I stopped buying.

I never liked the velveeta version. I like a dry macaroni and cheese. It’s not something I make on a regular basis, not even once a year but when I do I like it on the dryer side with a crunchy top. I use rigatoni noodles.
I’m an extremely health conscious eater and I don’t serve processed food but I there are a few foods from childhood that I loved. I don’t eat them often but when I do they still taste good to me. Kraft Dinner, a McDonalds cheeseburger(haven’t had one in probably 10 plus years) and Hostess chocolate cupcakes( haven’t had in probably 20 years) are the foods that come to mind.
On our last family sailing trip my daughter brought several boxes of Annie’s shells. All 8 of us devoured it. I also keep a box of Annie’s in our travel trailer when camping for those nights when it’s cold and windy and we don’t want to cook outside.

I thought this was an interesting side-by-side: 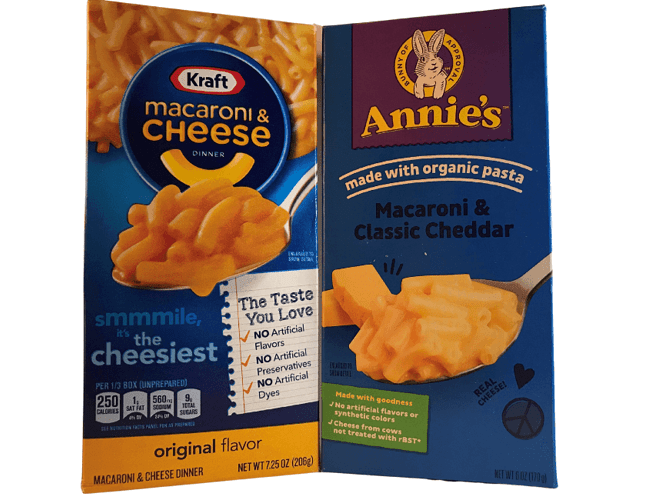 Kraft and Annie's are two of the most popular boxed macaroni and cheese brands in the United States. Most people can't remember Kraft not being on grocery

My mom refused to make it when I was growing up, only had it at friends’ homes. I made it for my kids when they were little, for lunch vs. dinner, especially if they had friends over. Now that they are adults, I doubt they eat it, I rarely use processed food in cooking, and they prefer homemade everything. I think it’s tasty in a gross way like fast food, but tastes bad after cooling. Here macaroni is just another name for pasta.

When my first child was young I made home-made Mac and cheese. My cousin, 4ish at the time, informed me that mine was OK, but the stuff in the blue box was better. Didn’t make it from scratch much after that.

I have eaten more boxes than i can count–both as a kid and as a parent.

Weird they made the Kraft Mac & Cheese with margarine and the Annie’s with butter. They should have made them the same way for an accurate comparison.

I can give or take the inclusion of -aroni in the name.

What shall remain constant is how I prepare a box:

Weird they made the Kraft Mac & Cheese with margarine and the Annie’s with butter.

That margarine versus butter was only in the nutrition section, presumably because that is how each product lists the “as prepared” nutrition numbers. The page mentions that “Each product was made with 1/4 cup of 2% milk, 4 tablespoons of butter, the powder cheeses, and the boiled noodles” for the taste test.

I’ve made lots of it. Teens will still eat it from time to time if its in the house. But they add spices to it. All my kids prefer homemade food over packaged.

All 3 of my kids love a variety of foods and aren’t afraid to try new things. I don’t feel guilty about serving them some blue box for lunches.

I like Kraft macaroni and cheese, but only buy the white cheddar version. Also, some here are mentioning the powered cheese, but I get the kind where the cheese is in a packet (nothing to add to it). I likely only have about 4 boxes per year though.

I get the kind where the cheese is in a packet (nothing to add to it).

Get ready to enjoy loads of cheese with Kraft Deluxe Macaroni and Cheese Dinner (14 oz Box); prepared with original flavor.

Do you mean the boxed kits where you roll out the dough? That was younger S’ favorite meal until he went to college. I roll up string cheese around the edges to make stuffed crust.

We’ve made it aplenty in our house along with all of the different varieties out now. But we don’t do it much anymore, since it’s just H & I. The kids’ sitter used to put cut up hot dogs in it and called it “Crawdad Stew.” The kids loved it, so we started making it too.

But I never noticed it wasn’t called Mac & Cheese before, so the change isn’t a big deal to me.

It is “Deluxe” white cheddar version. Packet has the creamy sauce in it.