How does the timeline slider work?

I’m going to show the mobile version, but it’s pretty similar on the desktop. The big difference is that you need to tap the bar on the bottom of the screen that says 241/477 or whatnot. (On larger screens it can be shown all the time.) Initially it might appear that only the faint blue line can be tapped. But the target is much larger than that. In fact, it extends beyond text as I’ve outlined in this image: 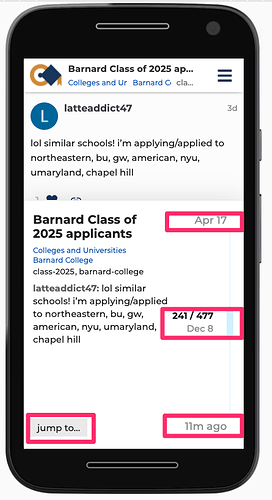 In addition, you can jump to any post number or date with the “jump to…” button. (I’m not sure this feature is available on the desktop, however.)

Finally, you can tap the space between the start and end of the timeline to instantly jump to that far into the thread. Again the target is quite wide. You don’t need to hit the faint blue bar. And this is also true on your laptop/desktop. Don’t aim for the blue line; just click anywhere above or below the progress indicator text.

I also put together a quick video demonstration: