I am a senior from MI who applied to Michigan State on October 3rd. Based on what I have seen in older posts on this forum, in-state students above a certain academic cutoff are given very quick decisions. I am most definitely above all of those cutoffs and have strong extracurriculars and essays. I am not showboating, I just think that MSU should be pretty simple for me to make.

I applied on the CommonApp. I had three decision plans: EA, RD, and Rolling. I chose Rolling thinking that my decision would arrive very soon. On the MSU website, I checked my application, and in some time it had changed from Rolling to EA. I emailed the admissions office about this, but they just said that I would get a response by January 15th. I saw my application portal change after this, though. I could see that everything was submitted and awaiting review for a while, but a few days ago, I saw the name of my admissions counselor, her picture, and some contact info.

Again, I am not too worried about MSU, but a quick decision would soothe some nerves and illustrate if I won any scholarships or not. Anyone with knowledge of this, please respond.

My daughter is in a similar situation. Do you have things listed to attach in your drop down menu? She applied in august and has still not heard. She contacted admissions because she thought maybe they were waiting on something. they said everything was received and to just wait to hear. Now there is a picture of admissions counselor and there are things listed in the drop down menu that weren’t there before. Such as essay and gap explanation along with a couple other things. She put her essay directly into the application and it says everything has been received. She hasn’t had a gap to explain, so I have no idea.

Glad someone posted this question. I was just about to go on and post something similar. My son applied via the MSU application early August. We had SAT and AP scores forwarded also. His school submitted his transcript on 9/1. He is still waiting to hear, but on the application page it just says “submitted”.

I called the admissions office and generally asked what the timeline was. I think it was a student answering because the answer was “sometime in November/December they will be sending decisions out”. It depends on majors, grades, scores,etc. Followed by “the higher ranked students would be accepted quickly” and “more controversial” candidates would take longer. I just let that go and said thanks and hung up before getting myself or my kid in trouble.

Any feedback from anyone accepted?

Hmmm. I have no clue. In the dropdown, it asked for my current schedule, which I immediately uploaded. I also got the picture of the admissions counselor recently. Hopefully this is a good sign?

Ok. I just remembered that on this forum people with significantly weaker stats got accepted in days last year. I tried to make best use of rolling admissions at MSU, but I do not know now.

For some reason things are taking longer. My other son applied in fall of 2019. He had very strong stats. He applied at the end of September and was accepted by 10/9.

I thought they were shooting for 6 weeks to review. We’re at about 12 since my kid applied.

Guess we’ll see if anyone posts they are accepted soon.

Does yours ask for anything else when you log on now? My daughters drop down options says: gap explaination, personal essay, syllabus, future courses and maybe one other thing.
She sent an email this afternoon. If / when she gets a response I will let you know what they say. 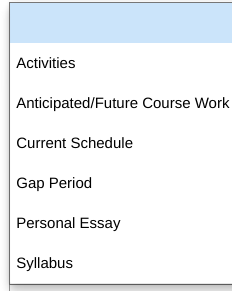 This is what I see. It also says that it received my current schedule and transcript. I doubt this dropdown has any relevance, though. I feel that MSU is just taking their own sweet time.

This is going to be a stupid question, but how do you get to that screen? Is there a particular page you log in on?

If you look back to last years thread, it appears that people didn’t start hearing back until November. So maybe it’s just a bit too early yet?

D22 applied about 2 weeks ago and hasn’t heard anything yet either. Admittedly, until I saw this thread and started investigating, I wasn’t expecting her to hear back until around January 15th.

Possibly. Maybe I am mistaking this for 2019 (when there were certainly students who applied AND got accepted in October).

You are correct. My son was accepted on 10/9/19. Looking at his letter now. I found the portal page.

Yes that is exactly what hers says. Ok I feel better. You are right. They are taking their sweet time. Hang in there. Your answer is coming soon I’m sure of it!

I think things are happening. What does it look like when you log in now? When my daughter logs in it has changed to being very basic.

Nothing has changed on my end.

Nothing changed for my son’s portal

My daughters changed back to the way it was. I was hoping. Lol

I don’t expect to hear back from MSU until January. This is what the school website says…