(FWIW I came across some old Concentration shows Alex Trebek hosted where there were some very questionable wardrobe choices LOL).

He did Concentration before Jeopardy. My guess is that the producer or someone other than the host sets the dress code
A notable difference was that concentration was a daytime show and Jeopardy is evening.

He did Concentration before Jeopardy.

I do not understand why after months of being critical of various guest hosts, people are now largely satisfied with one, but are fixated on her wardrobe.

I hope of any jeopardy staff tries to fix or design her wardrobe, she tells them to back off.

Well, that was certainly an interesting game!

Thanks for the run, Matt. He had a rough game tonight. Had the lead after the first round but it wasn’t huge. But second round was ugly for him. He seemed to get frustrated when Jessica ran the medical category and his timing was off the rest of the round (or at least was getting beaten to the buzzer which typically he wasn’t). He netted less than $1000 in that round, didn’t get a daily double in either round and missed several questions in the second round. And then missed Final Jeopardy (geography was a strong suit for him – not sure how you put the Alps in Poland). Final Jeopardy didn’t matter because both Jessica and Jonathan got it right.

Look forward to seeing Matt in the tournament of champions. And can Jonathan break the giant killer curse? I think only Emma (who beat James) won more than one game (and she made the finals of the ToC that season).

I like Mayim’s conservative look and I appreciate her dressing according to her values.
If the host was a man he’d wear a suit and no one would care or notice. I prefer the host to not be anything that is distracting to the show.

I was just thinking last week that Matt seemed to be ready to move on with his life … just little things led me to that feeling. Then today, he really seemed off. I wonder if it was just time. Regardless, he did a great job & if he had been a poor grad student, he no longer is.

Not all of us are on the earlier timezone Sorry. Would have thought those in markets where show airs later (noon eastern is the earliest air time from what I understand) would avoid threads like this one. Also needed to have avoided the NY Times, Yahoo, Washington Post and People amongst others who reported the results about 8pm eastern.

Matt answered questions via email from local paper (sounds like he has been living with his parents in Ohio during his win streak). One of interest looking at tonight’s show:

[quote] Q: You had been dominating. What about your final episode was different from the previous 38?

A: It’s all the buzzer timing. We don’t really know how it works, so when you’re in a groove things look great, but it can be hard to find that rhythm. I predicted that my loss would be on a Monday, the first show we tape in the morning, and that it would come after a long break. It had been 2 weeks since we last taped.[/quote] 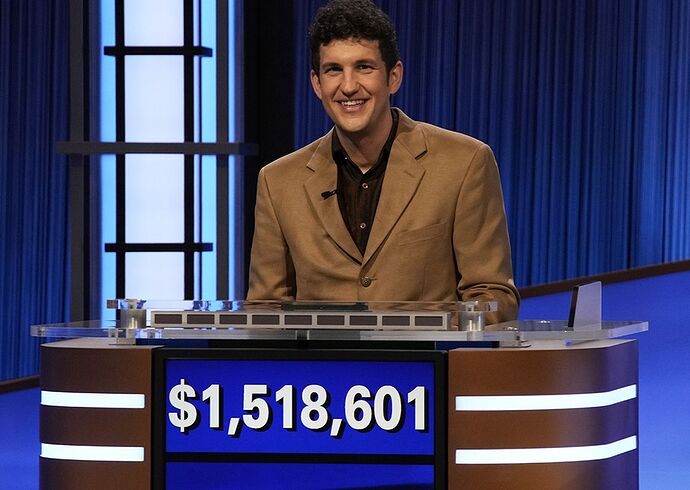 Matt Amodio’s record-breaking run on ‘Jeopardy!’ ends: ‘It was the thrill of...

No worries - but thread is titled New Jeopardy host

A Facebook friend posted the spoiler before the show aired here. I was not pleased.

I know nothing about how the buzzer timing works, and assume it is entirely automated, but thought this was interesting from the NYT. No idea if a new executive producer could have in any way altered buzzer timing.

"The episode marked another behind-the-scenes transition for the show. It was the first episode following the departure of Mike Richards, the television executive whose short stint as the new “Jeopardy!” host imploded over offensive comments he had made on a podcast. Richards stepped down as host after taping five episodes, then left his role as executive producer less than two weeks later.

Monday’s pretaped episode was executive produced by Michael Davies, a game-show veteran who developed the original American version of “Who Wants to Be a Millionaire?” and agreed to step in temporarily after Richards’s exit."

I am the OP and started the thread in March. The thread has evolved since then and has included the news about Matt’s run. Spoilers have been common and easy to avoid on this thread if you haven’t watched yet. Just don’t open the thread. Anyone, of course, may find a spoiler from another source when there is breaking news.

I ended up really liking Matt. Thought he would go longer . Interesting that he falls at the first game with a new producer. Went up against two strong competitors this time. Some of the past competitors seemed very weak, and I was surprised with some that they could make it through the vetting process.

Now that a major run has ended, I’ll be curious to see if the ratings dip.