Mayim is a scientist and multi degreed woman. She tried out for this role like many other many and women. She is sharp as a tack.

And we are discussing whether she is showing cleavage or legs (so to speak?). ??

It’s a game show. We want to see Vanna White looking nice and wearing designer clothing. Often the male hosts of game shows are sponsored by Bill Blass or YSL or another designer. Albert Einstein was smart but he wasn’t ‘TV ready’.

We care what newscasters wear, how they do their hair, what kind of glasses they choose. Sure we want them to be smart and ask good interview questions and know how to pronounce the president of Uganda’s name, but we want them to look nice too.

I think Mayim’s jackets are more tailored now than they were in the summer, and I like the look better. I’m the consumer, I get to have an opinion.

I’m not going to argue this but I could care less if Vanna is wearing her gym shorts and tshirt. Is she clean in appearance and not offensive? Good enough. As you said, “it’s a game show” - not a fashion show.

I also am fine if the contestants wear suits and dresses or denim. Because I’m watching with eyes and ears on the content not their ability to put an outfit together.

There is definitely a double standard in terms of views of what men wear and what women wear. Women are often judged on the basis of a skin to win view which doesn’t apply to men. And women who don’t follow the skin to win are then juged by a higher standard. In terms of women’s rights, gender equality, etc. the silence on the skin to win issue is baffling.

In terms of Jeopardy, we are back to pre-James mode of working the board from top to bottom. And smaller bets on daily doubles and final jeopardy. Not that higher scores should make the game more interesting but it does to a certain extent. On yesterday’s show, Jonathan won a third game despite commiting to me that which is a cardinal sin of Jeopardy: He had the lead going into Final Jeopardy, got the question right but still could have lost the game because he didn’t bet enough to assure himself the win with a correct response. Had Mary bet more money, she would have won despite Jonathan (with the lead going into FJ) having gotten FJ correct. Presumably each contestant was no comfortable with a sports category although all 3 contestants got the question correct.

Time to move on from the wardrobe discussion

@DadTwoGirls - My comment acknowledged that Mayim likely dresses that way because of her religious beliefs or her comfort level. I respect that.

I understand the job of a host (I have been an avid Jeopardy watcher for decades). I also commented that I think she is doing a great job,

Final Jeopardy tonight. I had no clue with the answer and none of the three contestants got it. H said what it was before the answer was revealed and I laughed. The last laugh was on me. I asked him how did you know this and he jokingly said that he was just smart!

Another 5 time champion now and more competitive contestants. I hope that the new producer and casting director person will pay off for Jeopardy. I want to see competition and we luckily seem to have gotten more of that this week.

OMG, that was an easy Final Jeopardy! I just looked up the question.

I’m in NC and there has been some chatter about all the contestants missing the Geo Trio $800 clue yesterday. I bet the CC regulars all know the answer: “North Carolina’s Research Triangle consists of 3 university cities: Durham, Chapel Hill & this home of N.C. State.”

Yeah, if nobody knows Raleigh, maybe we’re in worse shape than I thought!

It’s really amazing they missed that. I mean Raleigh is pretty hot/trending right now and shouldn’t it be a baseline that all Jeopardy contestants have to know the state capitals!?

Or the fact that the airport, RDU, is formally known as Raleigh–Durham International Airport.

Another 5 time champion now and more competitive contestants. I hope that the new producer and casting director person will pay off for Jeopardy. I want to see competition and we luckily seem to have gotten more of that this week.

This is the first week of shows with the new producer. Did he change the slate of contestants that was scheduled to appear? Is there a new casting director? I thought a month or two back the show had a new one and people were suggesting that he/she was picking weak contestants. Suggestion was also that strong contestants weren’t willing to fly to CA. Did that change with the new producer?

3 of this weeks 5 shows were runaways. Matt was averaging about 4 of 5. Margins would be bigger in the runaways if they were playing the board from the bottom up and betting big on Daily Doubles but they aren’t. Lower scoring games are more likely to be closer.

Its was interesting to me that Mayim doesn’t understand the strategy of betting in Final Jeopardy (Alex didn’t either though). She was surprised tonight that Jonathan bet small on Final Jeopardy. It was a runaway but by less than $2,000. So he wasn’t going to bet big and risk a loss in a runaway game.

Jonathan will be in the tournament of champions for this season. Will be fun to see him go up against Matt again (if that happens). Was fun to see Emma and James go head to head again in the final of that seasons ToC.

I thought the contestants were picked months in advance. My friend’s son was on a couple of year ago and I think he was picked in the spring, filmed in Aug and his show was aired in Oct. When the former champion with cancer was picked, she was scheduled to film in Dec but they asked if she could go earlier because of her cancer so they let her jump ahead several months. She did die before her original filming dates.

Contestants who make it through the in-person audition are put in a waiting pool for 18 months. Sometime during that period, if they’re lucky, they’ll get “the call” from Jeopardy notifying them that
they’d been selected to actually be on the show. At this point, their tape date is usually about 3 weeks away. After the show is taped, its usually about 2 months until air time - more if there’s some sort of tournament they have to fit into the schedule.

Wow. That is all I will say. I do think Mayim is doing a terrific job.

Not surprised. Jonathan seemed to be buzzing in and making wild guesses. He was up against two good opponents. I liked Jonathan but I don’t see him in the same league as Ken, Brad, James, or Matt.

Interesting Final Jeopardy question. I got Frost right away but couldn’t come up with O’Neill. I thought he was more of a Connecticut guy (his home is a museum in New London).

Last night everyone took turns missing Double Jeopary questions. In a close game, could have made a difference in the outcome.

Seems like we are back to typical Jeopardy play now. Generally playing from top down and relatively small DJ bets. Mayim noted that Jonathan had bet small in FJ but that was because he tended to have runaway games with small windows to bet and not risk a loss. She still is learning betting strategies. But I think she has settled in as host nicely.

But I think she has settled in as host nicely.

Starting November 8th Ken Jennings will be host for a while. I am not sure if Mayim is ready to fully commit to Jeopardy at the expense of her other ventures.

From her public statements, she has said she really wants the job. 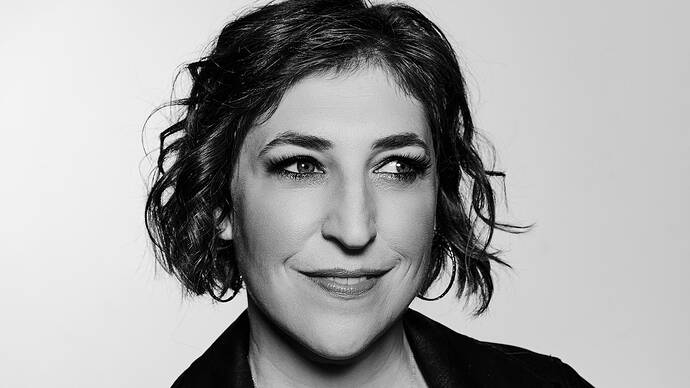 The actor and neuroscientist opens up about the tumultuous last few weeks.

Seems to me more likely the show is being more deliberate this time. Have Ken and Mayim finish out this year/season (not sure if we got clarification on that) and then pick a new new permanent host. But that isn’t necessarily something that we know. We will know when they announce the new host/plans.