how about math score.

Math GPA is only relevant for engineering majors. CS is not within the school of engineering.

Not for CS. It is for engineering school, including computer engineering and software engineering. CS as SJSU is outside of engineering, so they don’t give extra weight to math GPA. I really hope your kid gets in.

Someone just told me on Reddit that CS at SJSU is very bad. He told his recruiter to skip resumes with SJSU CS degree. Is it really that bad?

If it’s that bad, how come SV companies hire so many of their graduates? Among California colleges, I believe SJSU CS is just after UCB, Stanford, UCLA, USC, Cal Poly SLO at least in Silicon Valley. In terms of ROI, probably the best.

SJSU is a solid CS school with a strong local reputation and a pretty good track record of placing folks in high paid jobs. If you look at the CSU career outcomes data, SJSU CS is 2nd only to CalPoly, and ahead of all UCs except for UCB and UCLA. Here is data for the period 2014-17. 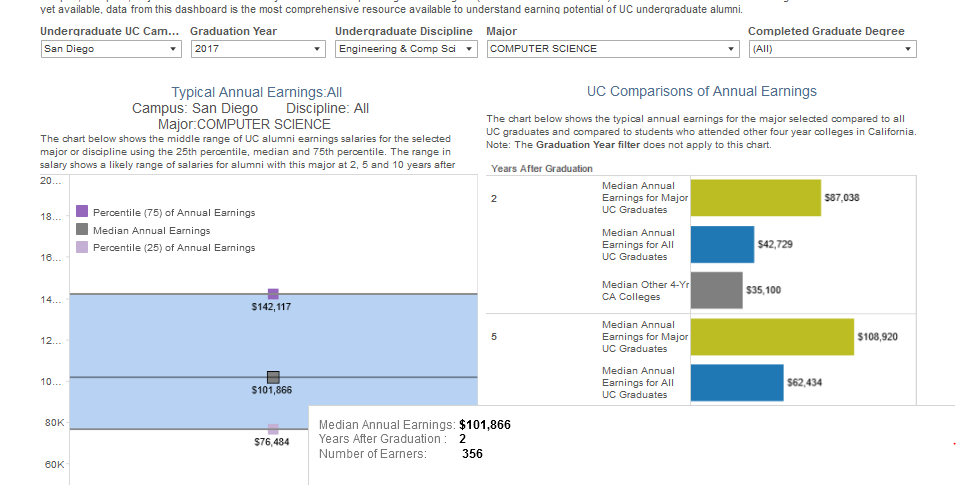 SJSU CS is super high ROI by any standards.

Due to the location of SJSU at the heart of Silicon Valley, it is to be expected. But, I am not so sure about the safety (SJ downtown and in particular SJSU itself has had crimes) and the teaching part. Students are able to explore a variety of options when it comes to jobs. But, I would worry more about the teaching of fundamentals of CS. I personally don’t feel its in the same league of UCs in that regard, but I may be wrong…

CS is ABET accredited and the career outcomes have been consistently good over time. Recruiters won’t be coming back if the kids are unprepared.

As far as safety, I don’t think downtown SJ is a hotbed of crime. It’s got the problems typical of most big cities. Have you seen Yale, Chicago, or Penn? People don’t turn them down because of safety.

Yes, that is true of most CSU CS programs. I am talking about the quality of actual professors. I have had first hand information from recent grads that I hired

I have no insight into that aspect so if that’s true that’s certainly something to consider. My objection was more towards the OPs account of SJSU being very bad and the general safety problems in big urban centers.

I’ve worked at several companies in the past 15 years in Silicon Valley and I have met many people at work from SJSU. I would say some companies like to recruit from certain schools, but I have not had the experience you are describing.

The count of domestic violence has a similar footnote (probably related to the same situation due to similar numbers).

what are these sites you are using?

The email down not tell you the outcome. You need to create an account and read the message online. The email says to log in to read it.

The CSU GPA is the one they look at. Hope it will work out for the best.

When the decision for OOS will be released ?