Welcome prospective Tritons. It’s that time of year again as the UC application has now opened and submission starts November 1. I am @Gumbymom one of the two UC Forum Champions/Moderators. My Co-Forum Champion is @lkg4answers and we are knowledgeable on the increasingly complicated UC admissions process and hopefully we can help any prospective UC applicants with their questions.

UC San Diego like all the UC’s are test blind this admission cycle and will use 13 areas of criteria to review Freshman applicants. Each campus will weight the various areas of criteria differently so one size does not fit all. The UC application website has plenty of information that can help determine if UC San Diego is a good option when applying. Below is some admit information specific to the school. Best of Luck.

The campus does not admit students on the basis of academic major or choice of UC San Diego undergraduate college. Alternate majors are considered. Also note: Capped majors require additional pre-req courses and specific GPA to be able to qualify for changing majors.

For Computer Engineering, can someone please rank all UCSD colleges?

The residential colleges are not major related. You should look at each colleges GE requirements and what AP/IB or DE courses can fulfill some of these requirements.

Muir is known to be the most flexible regarding GE’s. Warren is also a good option for Engineering students and also check Seventh College.

Here is a handy tool to compare the colleges: http://compare.ucsd.edu/

S22 wishes to pursue Mechanical Engg. He has been involved with Robotics through out High School. I see that that there are multiple specializations in the ME degree offered at UCSD . Picture below

My questions:
a) Are there any published stats on acceptance % to these sub ME branches?
b) And are they all treated equally ( meaning # of seats reserved for each sub branch), for admission purposes. Is one more capped Vs others?

There are no published stats by major for UCSD that I have ever encountered. UCSD admits into the University first and then into the major.

Edited: In the many years that I have been on CC and followed the UCSD decision thread l have only seen 2 CC posters that were accepted into ME with a specialization. The majority are admitted into just ME, although CC posters are only a small sample of the admitted students.

ME is a capped major so it is already a very competitive process just to get into the major. I would inquire directly with the ME department and maybe they can answer your questions.

Thank you @Gumbymom . Given that not every college publishes Admit rates by even Major, it does not surprise me that that there are no available stats for UCSD ME sub branches. We have just started researching into UCSD and so wanted to check on the forum. Good suggestion to check with the school directly. I will try that. Your UC posts are extremely useful! Thank you for continuing to share your knowledge with all of us.

I am also looking for ranking and more info on each college… this is what I found online. see if this helps. O's List: Blog - The 7 Colleges of UCSD

@Gumbymom - I reached out to the Admissions team at UCSD with my question on the Admit rates by Mechanical Engg Specializations. Apparently there is no difference. Wanted to update

Good luck all of you!!! UC San Diego was not my top choice but I have loved my time here so far (Computer Engineering & Marshall) and hope to see some of you on campus next fall!!! If you have any questions lemme know

also if you need last minute help ranking colleges, this person is p good, I agree with most of his assessments UCSD has started sending emails with information on how to set up your portal. If you did not receive it, check your spam and promotions folders.

Seems the enrollment at some departments is quite high. Do people have insight as to how it affects academics(class size, advising) and placement? Do the bottom 25 percent in biology, economics have trouble finding internships and jobs? 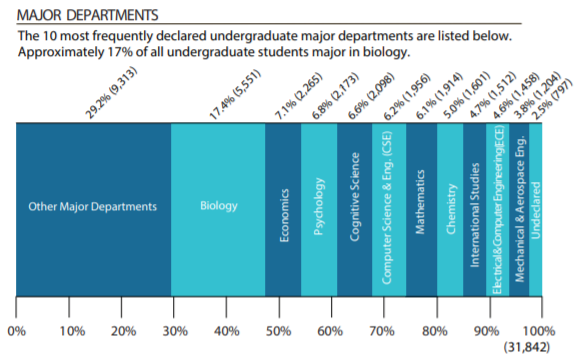 I have no specific experience in regards to UCSD but some experience with other UC’s instead. In general, any student needs to advocate for themselves and will not be handed a job or internship. It is up to the student to seek out their academic advisor and make the academic connections such as taking advantage of Professor office hours. Large class sizes are seen mainly with the GE type courses. Once the students get into their upper division major classes, the class sizes are much smaller.

All schools have career centers that will help with resume writing and interview skills along with job fairs and job postings. However, it is really up to the student to do their own research and find internships and jobs on their own.

I would also recommend that students join clubs related to any pre-professional programs they are interested in.